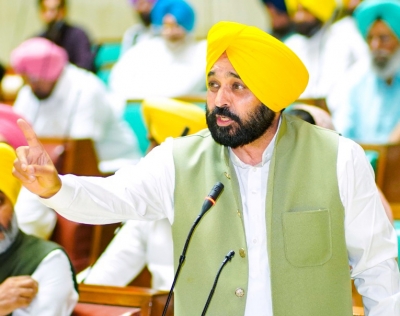 Taking note of the “baseless” statements by Akali leaders on the issue of the state capital, Punjab Chief Minister Bhagwant Mann on Monday slammed the Shiromani Akali Dal (SAD) leadership for diluting the claim of state on Chandigarh.

“Everyone knows who shifted the state government offices from Chandigarh to Mohali and formed New Chandigarh,” he said fter paying obeisance at Sri Harmandir Sahib, popularly known as the Golden Temple here.

The Chief Minister accused SAD leaders, Parkash Singh Badal and Sukhbir Singh Badal, of conniving with the governments at the Centre to dilute the claims of Punjab over Chandigarh.

He categorically asked Sukhbir Badal to explain that why the SAD was tightlipped about Chandigarh when they were partners in the successive government at the Centre.

Mann said the Badals have remained mum for the sake of their vested political interests adding that even the Congress leadership remained mute spectator on the entire matter.

The Chief Minister further said the Akalis and the Congress were trying to score brownie points before the media by issuing baseless statements.

Mann said his government is committed for the well being of every strata of society. He said that every issue is being resolved after active consultation with the general public.

The Chief Minister, while assailing the Congress, said that its ministers had sold the trees of the state. On the contrary, he said that his government is committed for making Punjab clean, green and pollution free.

Mann said that his government will restore the pristine glory of the state in the coming days, and has decided not to allow any industrial unit to come up near Mattewara forests in Ludhiana.