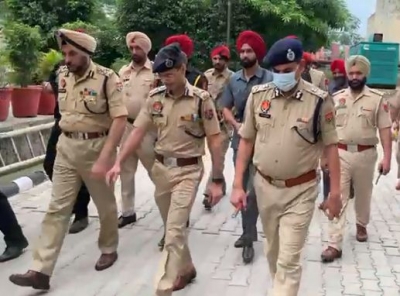 In order to infuse fear among the anti-social elements and instill a sense of safety and security among the common people, Director General of Police (DGP) Punjab Gaurav Yadav on Saturday led to conduct cordon and search operation in all 28 police districts.

DGP Yadav, who was joined by ADGP (Law and Order) Ishwar Singh in Mohali to conduct the operation, said with the Chief Minister Bhagwant Mann-led government adopting zero-tolerance policy against drugs and gangsters, such operations would continue.

“Since, we have tightened the noose around drug smugglers and gangsters, I would warn such anti-social elements to voluntarily leave the state otherwise the Punjab Police will deal them with a heavy hand,” the DGP said.

Interacting with the media on the sidelines of the operation, the DGP said the topmost priority of the government is to further strengthen the fight against drugs to make Punjab a drug-free state, besides eliminating gangster culture, maintaining law and order, and detection of crime.

He said basic policing which includes keeping vigil in vulnerable spots and advance preparation to tackle any untoward situation would be revived and police stations will be upgraded.

Answering a query on harassment of residents with this operation, he said the operation is being conducted for residents’ safety and security and residents welfare societies were also taken into confidence before conducting this operation.

“We have strictly instructed all the police personnel to deal with every resident in a friendly and polite manner while conducting door-to-door checking during the course of this operation,” said DGP Yadav.

Meanwhile, such operations will also help in activating and mobilising the police force by making direct contact with the public.