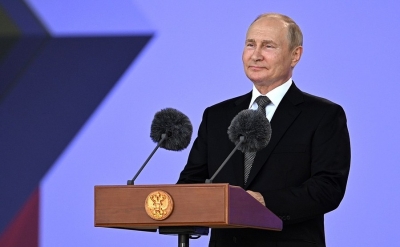 The Russian President is thought to have relieved Lieutenant General Roman Berdnikov of his duties over the failure of Kremlin troops to keep hold of vast swathes of Ukrainian territory over the last few days, Daily Mail reported.

A counter-offensive by Ukrainian forces has seen troops push to within 30 miles of the border, amid reports that ‘panicked’ Russian troops have been abandoning tanks, weapons and supplies.

There have been claims from some sources that Russian soldiers have “literally ran from their positions”, even leaving behind their clothes as they ran away from the advancing Ukrainian army in the Kharkiv oblast in the north-east of the country, Daily Mail reported.

It came as Ukrainian soldiers surge into the east of the country in an effort that has seen them take more than 1,000 square miles of territory in a matter of days, in a period of time that could prove to be a turning point in the war.

The move came after a sustained Ukrainian disinformation campaign’ about a counter-offensive in the south, which succeeded in diverting Russian troops in that direction and leaving the north east vulnerable to attack, Daily Mail reported.

The main advance in the area began six days ago and has forced Moscow to withdraw its troops to prevent them being surrounded.

According to the Main Directorate of Intelligence of the Ministry of Defense of Ukraine, Lt General Berdnikov was appointed as commander of the Western Armed Forces on August 26.

However, it seems his time in charge was short lived, with Ukrainian intelligence saying he has been sacked by Putin due to the rout in Kharkiv. There has been no confirmation from the Kremlin on this.

This came after unconfirmed reports back in June that he had been killed during fighting in the Donbas region of Ukraine.

As Russian troops desperately scrambled to get clear from oncoming forces in recent days, one Ukrainian unit said the chain of command had been broken and Kremlin troops were running away without even attempting to fight back, Daily Mail reported.