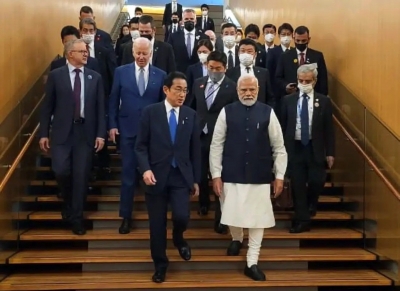 The situation in Ukraine is expected to dominate the discussions.

PM Modi also addressed a business summit and met members of the Indian community in Tokyo.

Under Quad, the vibrant democracies — US, Japan, Australia and India are representing different regions looking to build a security architecture using concept of democratic peace.

Further, S. Huntington in his seminal work, Clash of Civilizations argues that the unholy alliance between Islamic and Confucian civilizations is the most fundamental threat to the international order.

Earlier during QUAD in-person Summit in Washington DC in September 2021, the initiatives put forward by the leaders were e.g. ending the Covid-19 pandemic, including increasing production and access to safe and effective vaccines, and promoting high-standards infrastructure.

The upcoming Quad summit is expected to take stock of the Russia’s Ukraine war, and the impact of three months of Western sanctions. India is the only Quad member that has not joined sanctions against Russia nor has it directly criticised Russia for its invasion of Ukraine.

India has also increased its intake of Russian oil, buying more oil in March-April 2022, an estimated 40 million barrels more than it had in all of 2021, while the other Quad members, members of the G-7 and NATO have pledged to end their imports from Russia in time.

More recently, the issue of India’s ban on wheat exports10 have been taken up by the US and the EU, which has appealed to India to reconsider. India’s stand on the wheat exports ban, with some exceptions, had been outlined at the UN Security Council, emphasising on the importance of “affordability and accessibility” when it comes to food grains.

India has the view that open markets must not become an argument to perpetuate inequity and promote discrimination.

The Quad Vaccine Initiative had earlier planned a billion US-developed and funded vaccine doses manufactured in India and distributed by Japan and Australia by end 2022.

It ran into trouble over indemnity and other issues, and no vaccines have been distributed yet as part of the project designated at Hyderabad-based Biological-E Limited.

It is important to add that India distributed other vaccines to several countries individually so far, and it remains to be seen whether the upcoming Quad summit will see a “review” of the vaccine initiative under Quad umbrella.

The most noteworthy outcome of the last Summit was Quad pledging to deliver a billion doses of Covid-19 vaccine throughout the Indo-Pacific by the end of 2022 that was widely seen as a bid to counter China’s influence in the region.

We should note that US State Department claimed that Chinese military scientists presenting a new era of genetic weapons allegedly investigated weaponising coronaviruses five years before the Covid-19 pandemic, 14 and also predicted a World War III would be fought with biological weapons to collapse the enemy’s medical system.

It should be noted that the high seas belong to mankind, and its economic zones are in an exclusively possession of the adjacent coastal states. We are well aware about the Chinese tactics of dominance under its most ambitious, extensive and expensive project in the world, Belt-Road trap in which on the name of economic integration, China is engaged in construction of roads, railway lines, shipping routes, ports, oil refineries, industrial parks, and power plants to more than fifty countries across the globe costing between one to eight trillion dollars.

Yet, the BRI is fast turning into belt and roads blocks with potholes. BRI is not a gift, but a debt trap with a singular strategy in hand to lure the developing fragile nations into borrowing more than they can afford and pay off.

Keeping the above in mind, US wants to propose an ambitious economic initiative for the region in this summit, i.e. the Indo-Pacific Economic Framework (IPEF), designed to tackle emerging economic challenges in the post Covid-19 age.

IPEF will work on ranging “from setting the rules of the digital economy ensuring secure and resilient supply chains to managing the energy transition to investing in clean, modern high standards infrastructure”.

In the field of critical and emerging technologies, the Quad member states are expected to launch a satellite-based maritime initiative to curb illegal fishing in the Indo-Pacific region. The system will enable to monitor illegal fishing even when fishing boats have turned off the transponders.

India and US are also expected to discuss India-US Strategic Partnership.

PM Modi and the Australian PM are expected to review the India-Australia Comprehensive Strategic Partnership.

Indian PM will have a bilateral meeting with Japan Prime Minister Kishida which will provide an opportunity to carry forward their conversations from the 14th India-Japan Annual Summit held in March 2022, when PM Kishida visited India.

PM Modi will also participate in a business event with Japanese business leaders and address and interact with the Indian community in Japan.

Since the establishment of QUAD, China accuses Quad to sow discord by projecting China as a potential threat and fabricated lies about it, maliciously manufactured political confrontation, continuing cold war psyche and of ideological prejudice.

Further, it has also advised the group to refrain forming exclusive small cliques. Chinese reference of Quad meeting as selective multilateralism and Covid politics showed its high frustration because of emerged alternative international collaboration on global vaccination, something which China had unilaterally reserved for itself for profiteering.

Making Quad effective against China, the member countries must stand together against Chinese plots on the principle of collective security.

Further, the Quad meeting could be seen as a step in the right direction both in the security realm where the rise and advancement of authoritarian China is noticeable; also, in the domains of technology, climate, infrastructure and global pandemic.