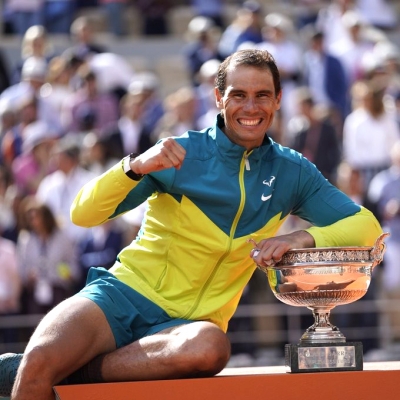 Adding another chapter to his historic legacy, World No 5 Rafael Nadal clinched his 14th French Open title and a record-extending 22nd Grand Slam trophy after beating Casper Ruud 6-3, 6-3, 6-0 in the final of the tournament, here on Sunday.

By earning a 22nd Grand Slam crown, the Spaniard has moved further clear of Novak Djokovic and Roger Federer in the Grand Slam race, with the Serbian and Swiss tied on 20 major titles.

It is the first time Nadal has won the Australian Open and Roland Garros trophies in the same season and he is now level with countryman Carlos Alcaraz on a Tour-leading four titles in 2022 after improving to 112-3 at the clay-court major.

“For me personally, it is very difficult to describe the feelings that I have. It is something that I have never believed. To be here at 36, being competitive again on the most important court of my career,” Nadal said during the trophy ceremony.

Nadal’s achievement in Paris is even more remarkable considering that he struggled with a chronic foot injury in defeat to Denis Shapovalov in Rome little more than three weeks ago. However, he showcased his trademark fighting qualities throughout the fortnight in Paris to ensure he would maintain his stranglehold on the French Open trophy, improving to a remarkable 14-0 in Roland Garros finals.

In front of a raucous crowd on Court Philippe Chatrier, the 36-year-old produced an intense and aggressive first-set performance, hitting his forehand with heavy topspin to outsmart the Norwegian and move ahead.

After making a slow start to the second set, the Spaniard rallied from 1-3 by returning to basics. He hung in points, won the longer exchanges and produced an array of stunning passing shots off both wings to take further control, before racing clear in the third set to secure another memorable victory after two hours and 20 minutes.

“Casper, it is a real pleasure to play a final with you here at Roland Garros. You are great. I want to congratulate you on the amazing career you are having, especially these two weeks are a very important step forward, so I am very happy for you�I wish you all the very best for the future,” Nadal said while addressing Ruud.

Nadal, who will rise to No 4 in the ATP Rankings on Monday, moved past Top 10 stars Felix Auger-Aliassime, Novak Djokovic and Alexander Zverev to set a first ATP Head to Head meeting with World No. 8 Ruud.

Following his triumph over the Norwegian, the Spaniard has become the third player to earn four Top 10 wins at a Grand Slam since the ATP Rankings started in 1973. Mats Wilander at Roland Garros in 1982 and Roger Federer at the Australian Open in 2017 also achieved the feat.

The 36-year-old’s continued dominance in Paris has seen him extend his lead in the Pepperstone ATP Race To Turin. He holds a 30-3 record on the season and has now captured a record 63 tour-level titles on clay in his career.

“The most important thing is to congratulate Rafa. It is your 14th time here and 22nd [title] at Grand Slams.We all know what a champion you are and today I got to feel how it is to play against you in the final and it is not easy. I am not the first victim, I know there have been many before,” Ruud said during the trophy ceremony.

Ruud, who has trained at Nadal’s academy in Mallorca since September 2018, was competing in his maiden Grand Slam final after overcoming Croatian Marin Cilic in four sets to earn his 30th win of the year.

The 23-year-old had never been beyond the fourth round at a major prior to his run in Paris and was the first Norwegian man to reach the championship match at a Grand Slam in the Open Era. The eight-time tour-level champion, who has earned a Tour-leading 66 match wins on clay since 2020, will rise to a career-high No 6 in the ATP Rankings on Monday.