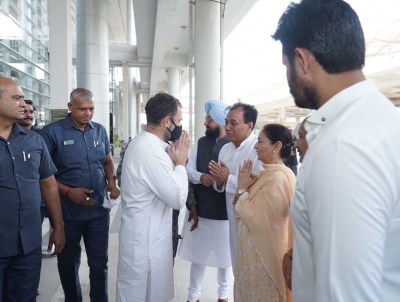 Former Congress president Rahul Gandhi on Tuesday reached Punjab’s Mansa district on Tuesday and met the parents of singer Sidhu Moosewala, who was gunned down by assailants on May 29, and expressed grief.

Several Congress leaders, including state party chief Amrinder Singh Raja Warring, and Leader of Opposition Partap Singh Bajwa, were among others, who received Gandhi at the airport in Chandigarh from where they reached his native Moosa village in a two-and-a-half- hour drive.

Moosewala, whose mother Charan Kaur is sarpanch of his native Moosa village, made his electoral debut as a Congress candidate from Mansa in the February Assembly polls and faced defeat.

Just ahead of the visit of Rahul Gandhi, the Vigilance Bureau in Punjab arrested Congress leader and former minister Sadhu Singh Dharamsot under the Prevention of Corruption Act.

Dharamsot, who was the Forest Minister in the previous Congress government led by Capt Amarinder Singh, is accused of being involved in illegal felling of over 25,000 trees.

A day earlier, Congress leader and former Rajasthan Deputy Chief Minister Sachin Pilot met the family of Moosewala in his native place. “Drug mafia, terrorists, gangsters have set their foot in (in Punjab)…The Centre and state should probe it (Moosewala’s death) and act against the culprits. We should all take a vow that we will never allow terrorism to set its foot in Punjab again,” he told the media, seeking strict punishment to those responsible for the killing of Moosewala.

During their meeting with Shah in Chandigarh, the victim’s father demanded a CBI probe into his son’s killing.

In less than 24 hours after his security was curtailed by the government, Moosewala was shot dead by gangsters close to his ancestral village in broad daylight.