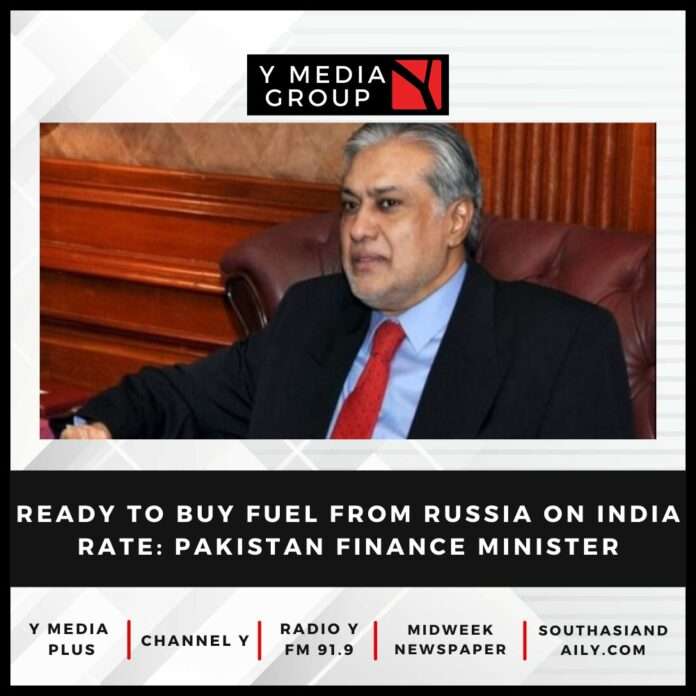 Pakistan Finance Minister Ishaq Dar, who is on an official visit to the US, has said that Islamabad is ready to buy fuel from Russia on the rate it was providing to India.

While replying to a question by the media, the Minister on Monday said he hoped that the West would also have no objection to importing the discounted fuel in the wake of Pakistan’s financial hardship due to unprecedented recent floods, which devastated large parts of the country, The News reported.

Dar said the coalition government in Centre had enough time to return to the political front.

“Ten 10 months are enough for the government to restore its political prestige and win popularity. We were to select one thing among the two: either to save our politics or the state. We opted for the second,” he said while commenting on the by-poll results.

To a question about US President Joe Biden’s statement on Pakistan’s nuclear programme, he said Prime Minister Shehbaz Sharif had already said that a robust command and control system was in place in the country.

The US authorities also acknowledge it often, he added.

“I have held 58 meetings with the heads of international financial institutions, the US, Saudi Arabia and other countries’ authorities during my four-day stay in Washington.”

Dar said the World Bank and the UK hosted a roundtable conference to discuss floods in Pakistan.

The UNDP, ADB and the World Bank authorities presented a joint report there, he added.

According to the report, Pakistan suffered losses to the tune of $32.40 billion due to floods. More than $16 billion are needed by Pakistan for the rehabilitation work, the Minister said.

Dar also expressed optimism that Pakistan would get out of the grey list of the Financial Action Task Force (FATF).

He said that Pakistan worked hard to exit the grey list.

A meeting was expected in a few days and the government was hopeful that the country would come out of the FATF grey list, he hoped, The News reported.