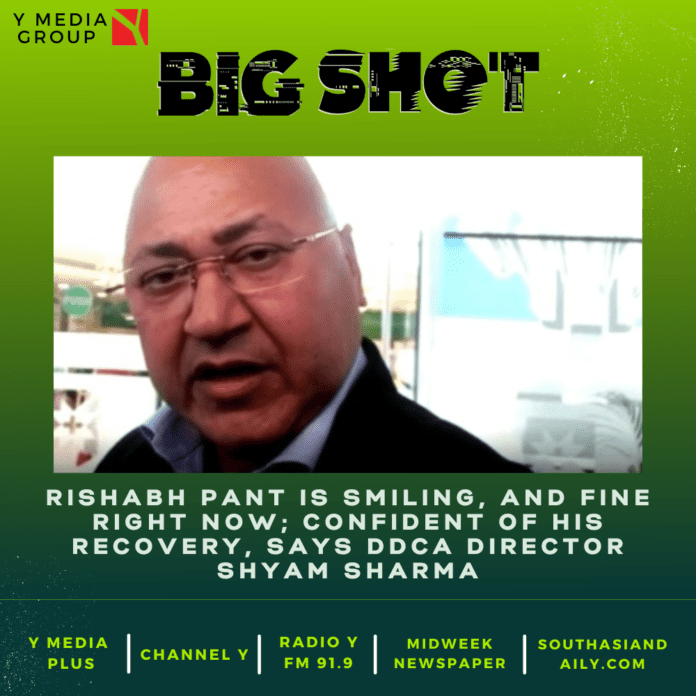 Injured India wicket-keeper batter Rishabh Pant is fine right now and smiling, says DDCA Director Shyam Sharma, who added that he is confident of his swift recovery from the injuries he sustained in a car accident on Friday morning.

“He’s fine right now. Smiling as of now and he’s recovering. It is good as our kid will recover quickly and I am confident of this currently. He is in the ICU presently,” Sharma told IANS from Dehradun, where he had gone to meet Pant.

On Friday morning, Pant, 25, suffered multiple injuries when his car collided with a road divider and caught fire on the Delhi-Dehradun highway. A serious car accident happened between Manglaur and Narsan in the Haridwar district in the state of Uttarakhand.

He has been admitted to Max Hospital in Dehradun after being initially taken to Saksham Hospital Multispecialty and Trauma Centre. Pant was on his way to his hometown Roorkee from New Delhi.

Earlier, DDCA President Rohan Jaitley had said if needed and medically advisable, his organisation will airlift Pant from Dehradun to New Delhi for his plastic surgery. But Sharma said the future plan for Pant’s treatment will be decided by the Board of Control for Cricket in India (BCCI).

“The future plan of the treatment will be decided by the BCCI. BCCI are the one authorised to decide this. I went out of courtesy as a family as Rohan Jaitley said me to go and meet him. Rishabh Pant is just like our kid and boosts his morale of him and see what the situation is.”

On Friday evening, a medical bulletin said the results of Pant’s MRI of the brain and spine are normal. It added that Pant also underwent plastic surgery to manage his facial injuries, lacerated wounds and abrasions while the MRI scans of his ankle and knee have been postponed till Saturday because of pain and swelling.

As per an official statement from the BCCI on Friday afternoon, Pant has two cuts on his forehead, a ligament tear in his right knee and has also hurt his right wrist, ankle, and toe and has suffered abrasion injuries on his back after the car accident.

Pant was part of the India Test squad that sealed a 2-0 series victory over Bangladesh a couple of days ago in Dhaka, where he hit a match-winning 93 in the first innings of the second Test at the Sher-e-Bangla National Cricket Stadium. He was not named in India’s T20I and ODI squads for matches against Sri Lanka starting from January 3.