Rishabh Pant to be sidelined for majority of 2023 after tearing three key knee ligaments: Report 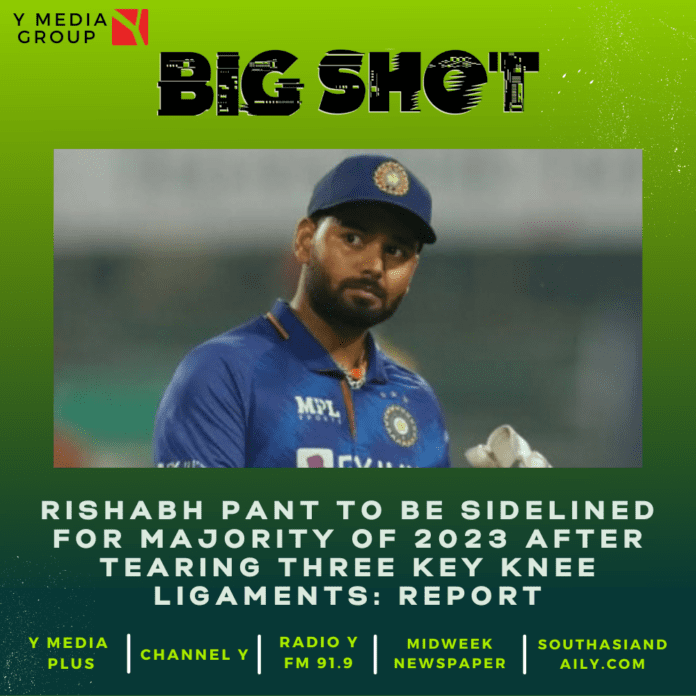 India wicketkeeper-batter Rishabh Pant is highly expected to be sidelined from a majority of cricketing action in 2023 after tearing three key ligaments on his right knee.

A report by ESPNCricinfo says Pant, who miraculously survived a horrific car crash on December 30, has torn all three key ligaments in his right knee, two of which were reconstructed recently during the surgery which happened on January 6 while the reconstruction of the third torn ligament is expected after six weeks.

“It is understood that in the surgery conducted recently, both the PCL and MCL were reconstructed. Pant will need to undergo another surgery to reconstruct his ACL, but the doctors will wait for at least six weeks before going ahead with it,” said the report.

As a result, Pant is in danger of being sidelined from the game for at least six months, which can potentially affect his chances of being fit and available for selection for the 2023 ODI World Cup, scheduled to take place in India in October-November.

On December 30, around 5:30am, Pant, 25, suffered multiple injuries when his car collided with a road divider and caught fire on the Delhi-Dehradun highway. The horrific car accident happened between Manglaur and Narsan in the Haridwar district in the state of Uttarakhand.

Pant was initially taken to Saksham Hospital Multispecialty and Trauma Centre, before being admitted to Max Hospital, Dehradun. He was on his way to his hometown Roorkee from New Delhi and was alone while driving his Mercedes car.

On January 4, the Board of Control for Cricket in India announced that Pant would be shifted from Dehradun to Mumbai via an air ambulance for surgery and further treatment, where he is now under direct supervision of Dr. Dinshaw Pardiwala, the head of the Centre for Sports Medicine, and Director of Arthroscopy & Shoulder Service, at the Kokilaben Dhirubhai Ambani Hospital in Andheri West, Mumbai.

The first medical update from the BCCI hours after the accident on December 30 said apart from right knee ligament tear, Pant suffered two cuts on his forehead, and has also hurt his right wrist, ankle, and toe apart from abrasion injuries on his back.

Later that evening, a medical bulletin said the results of Pant’s MRI of the brain and spine came out as normal. It added that Pant also underwent plastic surgery to manage his facial injuries, lacerated wounds and abrasions.

The report also said that there is no definitive timeline given by the doctors yet on how long it would take Pant to resume training for playing cricket. It added that the Board of Control for Cricket in India (BCCI) and the selectors have concluded that the wicketkeeper-batter would be out for a minimum of six months.

It implies that Pant will miss white-ball series against New Zealand, four Tests for the Border-Gavaskar Trophy and three ODIs against Australia, IPL 2023, where he is captain of Delhi Capitals and World Test Championship (WTC) final in June if India makes it to the title clash.

Pant, who made his international cricket debut in February 2017, was part of the India Test squad that sealed a 2-0 series victory over Bangladesh in Dhaka in December 2022. In that match which ended on December 25, he hit a match-winning 93 in the first innings of the second Test at the Sher-e-Bangla National Cricket Stadium.