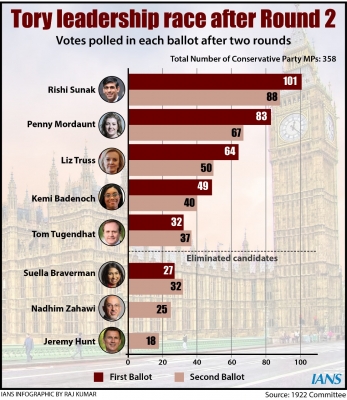 UK’s former Chancellor of the Exchequer Rishi Sunak still remained on top in the race to succeed Prime Minister Boris Johnson in the second round of voting among Conservative Party MPs on Thursday, but Indian-origin Attorney General Suella Braverman was knocked out.

Sunak, with 101 votes, maintained his lead over Trade Secretary Penny Mordaunt, who got 83 votes. In the first round on Wednesday, he had got 88 votes, with Mordaunt in second place with 67 votes.