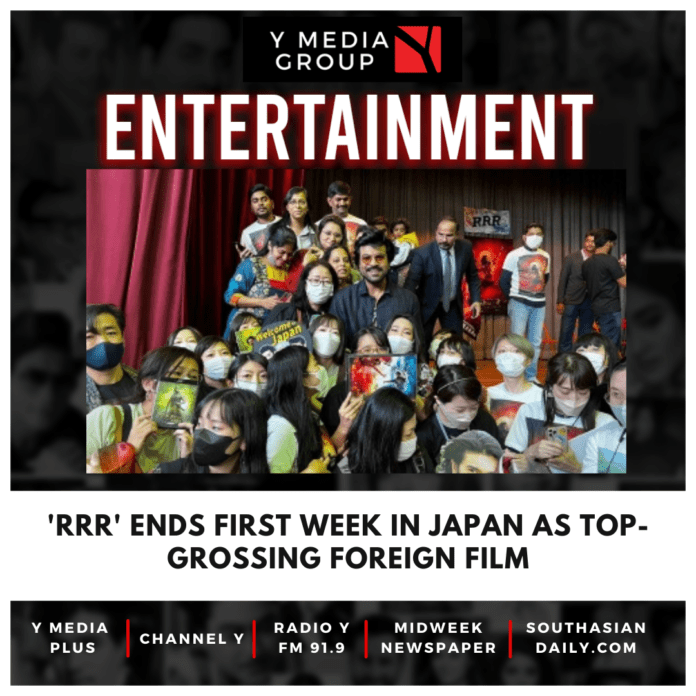 After an impressive worldwide run, where it grossed $145 million, including $14.5 million in North America, the film released in Japan on October 21.

Keizo Kabata’s Twin released ‘RRR’ in 209 screens and 31 Imax screens across 44 cities and prefectures in Japan, the widest for an Indian film in the East Asian nation where Rajinikanth is the most popular Indian star. Rajamouli, NTR Jr and Ram Charan visited Japan on a promotional tour for the film.

In a week, ‘RRR’ collected JPY73 million ($495,000), making it the highest first week collections for an Indian film in Japan, according to Twin. ‘RRR’ opened at No. 10 and the top nine films were all local Japanese productions.

‘RRR’ was the highest-grossing foreign film of the week, ahead of ‘The Bad Guys’, ‘Spencer’ and ‘Jurassic World Dominion’. Twin estimates that ‘RRR’ will recover release costs and enter into profit within 10 days of release.

‘Muthu’, starring Rajinikanth, remains the highest-grossing Indian film of all time in Japan with a box-office collection of JPY400 million, adds ‘Variety’.

‘Muthu’ was released in arthouse cinemas on limited screens in 1998 and ran for a year. There has not been a significant amount of inflation in ticket prices even though it was released 24 years ago. The average ticket price for ‘Muthu’ was JPY1,800; the ‘RRR’ tickets are priced at JPY1,900.

There is a lack of historical data for Indian films at the Japanese box office due to them being released in arthouse cinemas, but distributors and industry insiders in Japan have collated a chart.

“Director Rajamouli is one of the most anticipated directors and has a solid fan base in Japan because ‘Baahubali 2’ ran for a year in 2017 and grossed JPY300M,” Twin’s Kabata told ‘Variety’.

“Also, the Japanese theatrical market is getting back to normal and audiences anticipate having an exciting cinema experience like ‘RRR’,” Kabata added, noting: “Japanese audiences find that Indians films, especially ‘RRR’, are completely different from the films they normally watch. Indian films have tremendous energy. They make them feel refreshed.”