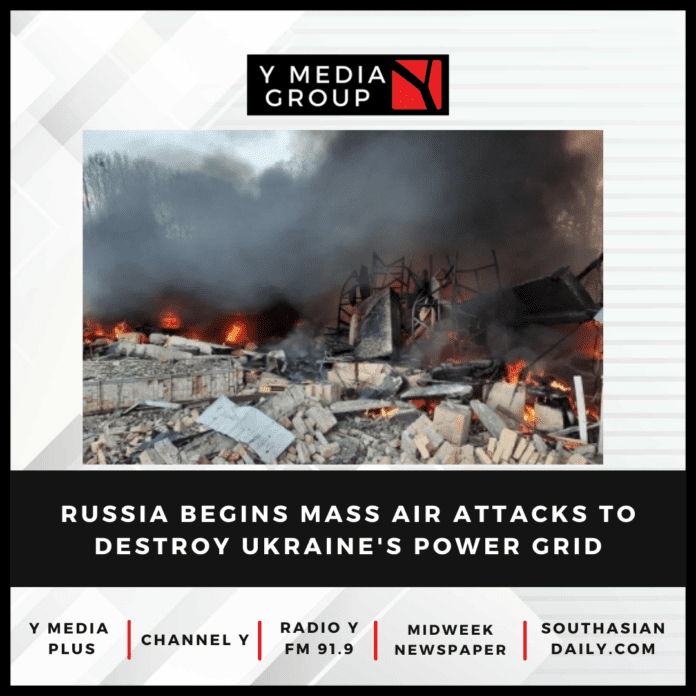 The second mass air attack in days has been launched by Russia across Ukraine, with a barrage of rockets fired at several regions across the
country, media reports said on Friday.

The aim of the mass attack, authorities said, appeared to be to destroy the Ukrainian power grid in the hope that damaging Ukraine away from the frontline would enable Russia to make gains on the battlefield, The Guardian reported.

Two people had died and a further five had been injured, including two children, after a rocket hit a residential building in the southern city of Kryvyi Rih, the head of Dnipro region, Valentyn Reznichenko, said on his Telegram. The injured were being treated in hospital. The building’s entrance was destroyed in the attack, he added.

In the capital, Kyiv, explosions were heard in the south-western district of Holosiivkyi, as well as the eastern districts of Dniprovskyi and Desnyanskyi, according to the city’s Mayor, Vitaliy Klitschko, The Guardian reported.

At least one energy infrastructure facility appeared to have been hit in Kyiv. There were water disruptions in every district, according to Klitschko. The Ukrainian energy company DTEK said emergency power outages would be introduced in the city as result of the attack.

Kyiv’s metro suspended all lines but the stations were still open as bomb shelters, Klitschko said. Mobile internet was out in several areas of the capital.

Power outages have been reported in Ukraine’s eastern and central regions of Kharkiv and Poltava, according to their authorities.

There have been 15 hits in Zaporizhzhia region, according to its Governor, Oleksandr Strukh, who said authorities were clarifying the extent of the damage and that emergency services were on the scene, The Guardian reported.