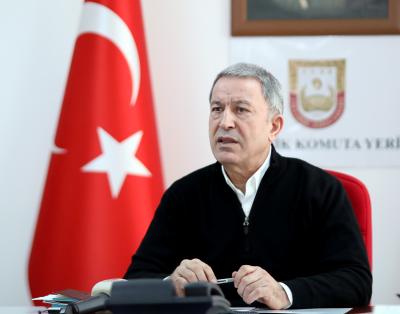 Russian officials have told Ankara that Russia had “nothing to do” with the attacks on Ukraine’s key Black Sea port of Odesa, Turkish Defence Minister Hulusi Akar has said.

“In our contact with Russia, the Russians told us that they had absolutely nothing to do with these attacks and that they were examining the issue very closely and in detail,” Akar told Turkiye’s state-run Anadolu Agency on Saturday.

“The fact that such an incident happened right after the agreement we made yesterday (Friday) regarding the grain shipment worried us,” he said.

Akar said he also had phone conversations with Ukrainian ministers and received information regarding the incident, Xinhua news agency reported.

The Ukrainian military said that Russian missiles hit infrastructure in Odesa on Saturday. A missile hit one of the silos in Odesa and another fell in an area close to the silo.

The attack had not compromised the port’s ability to load cargo and that grain exports could go on, according to Akar.

Turkiye has sent the two countries a message, in which it said it would like to see both sides continue their cooperation “calmly and patiently” under the agreement signed on Friday, the minister said.

Turkiye would continue to fulfil its responsibilities in the agreement, he stressed.

The Black Sea Grain Initiative, signed respectively by Russia and Ukraine on Friday with Turkiye under the auspices of the UN in Istanbul, would allow significant volumes of commercial food and fertilizer exports from three key ports in the Black Sea — Odesa, Chernomorsk, and Yuzhny, the UN said in a statement on its website.

A joint coordination center has started operating in accordance with the agreement to monitor implementation, the Turkish minister added.

According to a copy of the agreement released by Andrii Sybiha, deputy head of the Ukrainian presidential office, the deal will be effective for 120 days and can be extended for another 120 days if neither party terminates it.

Ukraine is among the world’s leading grain exporters, supplying more than 45 million tons annually to the global market, according to the UN Food and Agriculture Organization.