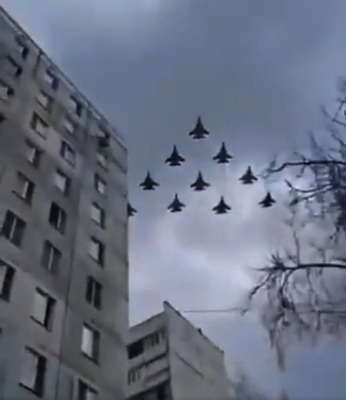 Several explosions were heard around the eastern Kyiv suburbs of Darnytskyi and Dniprovskyi early on Sunday morning, wounding one person. The strikes represented a change of tack on the part of the invading forces, The Guardian reported.

Russia’s Ministry of Defence said the strikes had destroyed T-72 tanks that had been provided to Ukraine by European countries that were being stored in the buildings of a car repair business, although the claim could not immediately be verified, The Guardian reported.

Kyiv’s Mayor, Vitali Klitschko, said “one victim was hospitalised” in the incident. Sergei Leshchenko, a member of the Ukrainian railway company’s supervisory board, added that its facilities had been struck.

They were the first bombing raids on any part of the capital since the end of April and appear to represent an attempt to strike supply lines from Kyiv to the east, where both sides are embroiled an intense battle for control of Donbas.

Perhaps signalling the new approach, Putin told Rossiya state television that Russia would hit fresh targets in Ukraine if the US delivered the longer-range rockets that it had promised to Kyiv last week.

If such missiles were supplied, “we will strike at those targets which we have not yet been hitting”, said Putin, who is believed to be closely involved in military decision-making. The Russian leader did not specify what would be struck, although logistics points would be amongst the most logical targets.