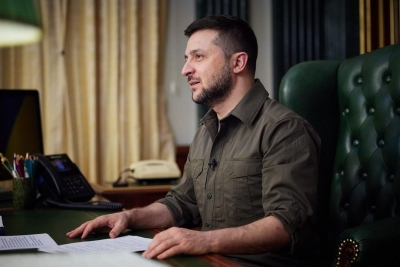 Ukrainian President Volodymyr Zelensky said that Russia may lose more than 40,000 soldiers by the end of June.

In a video address on Sunday, the President said: “The Russian army is trying to deploy reserve troops in Donbas. But what reserves can they speak of right now?

“It seems that they will throw poorly trained conscripts into the battle, as well as those who had been recruited via covert mobilisation efforts. Russian generals consider their people simply as cannon fodder, which they need to ensure they outnumber us in military personnel, in military equipment.

“But this only adds up to one thing: Russian losses in June might exceed 40,000 military personnel. They have not lost as many soldiers in any of the wars in many decades.”

Zelenksy went on to say that currently the most fierce battles between the two warring nations are taking place in Sievierodonetsk, a city in the separatist Luhansk region in Donbas, reports Ukrayinska Pravda.

“Ukrainian Defence Forces are fighting for every inch of Ukrainian land,” he said, adding that Russian forces were also advancing on Lysychansk, Bakhmut and Sloviansk.

While Lysychansk is in Luhansk, both Bakhmut and Sloviansk are in Donestsk, also a part of Donbas.

Meanwhile, the Luhansk region’s military administration said that Russian forces have been relentlessly firing on Lysychansk and Sievierodonetsk over the course of Sunday.

A six year-old child was killed as a result of Russian shelling, it said, adding that Russian forces were trying to press past the Ukrainian defence line by exerting fierce artillery fire.

Share
Facebook
Twitter
Pinterest
WhatsApp
Previous article
Average Rent For All Canadian Properties Listed On Rentals.ca Was $1,888 Per Month In May 2022; Up 3.7% From April
Next article
Will staggered paddy transplantation in Punjab, will Delhi have better air quality?