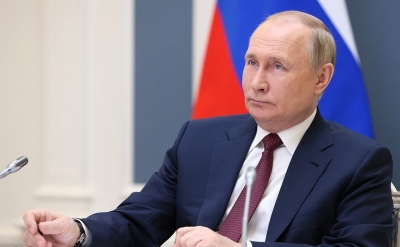 Russia will hit targets it has so far not struck if long-range missiles are delivered to Ukraine, Russian President Vladimir Putin has warned.

“If they are supplied, we will draw the appropriate conclusions and use our weapons, which we have enough of, in order to strike at those objects that we have not yet struck,” Putin told Russia 1 in an interview.

The Russian president noted that the shipment of US-made multiple-launch rocket systems confirmed by President Joe Biden on Tuesday is unlikely to bring anything new to Kiev’s forces, RT reported.

The Ukrainian military already has Soviet- and Russian-designed Grad, Smerch, and Uragan systems of the same kind, he SAID.

Berlin might provide Kiev with submarines, the Ukrainian Parliament’s Chairman, Ruslan Stefanchuk, claimed during a visit to Germany amid the ongoing Russian military operation in his country.

Ahead of a meeting with German Defence Minister Christine Lambrecht on Friday, the head of the parliament said the “supply of the most modern equipment to Ukraine” and speedy decision-making on the matter will bring “common victory” over Russia closer.