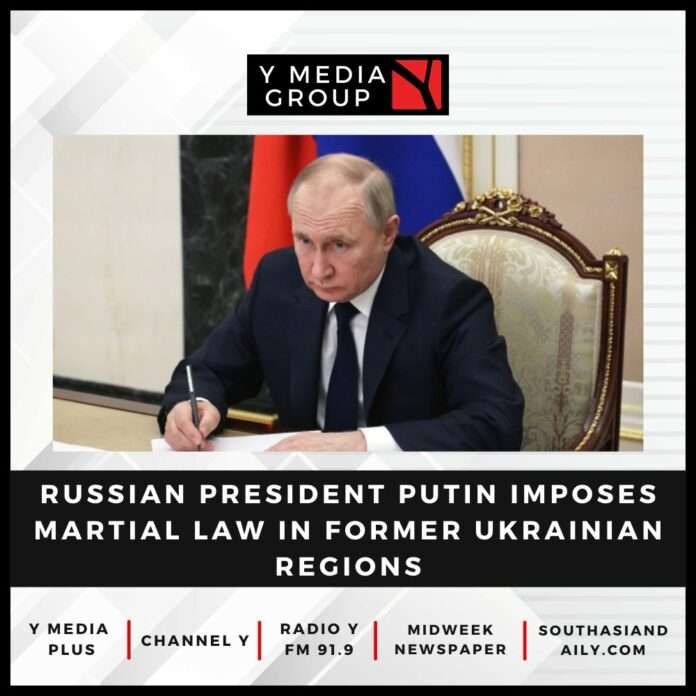 Martial law has been imposed in the four regions that recently voted to become part of Russia amid the conflict with Ukraine.

The Donetsk and Lugansk People’s Republics, as well as Kherson and Zaporozhye regions, already had martial law in place when they became part of Russia, Putin said.

So, the decision provides the legal basis for it to remain in place under Russian sovereignty, he said during a meeting of the National Security Council.

In a separate decree signed on Wednesday, the Russian President ordered a state of mid-level response’ in several other parts of the country bordering Ukraine.

These include the Crimean Republic, the city of Sevastopol, as well as Krasnodar, Belgorod, Bryansk, Voronezh, Kursk and Rostov regions. This is a special regime that gives officials additional authority to ensure security and rapid reaction to any emergencies, RT reported.

People in the four former Ukrainian regions voted in referendums last month to ask Moscow to accept them as part of Russia. Kiev rejected the votes as illegitimate and pledged to use military force to seize the regions.

Earlier on Wednesday, officials in Kherson region reported that Ukrainian troops appeared to be deploying for a large-scale offensive against the capital, Kherson.

The regional administration announced this week the relocation of residents from the city to the eastern side of the Dnieper river due to the threat posed by Kiev’s forces, RT reported.