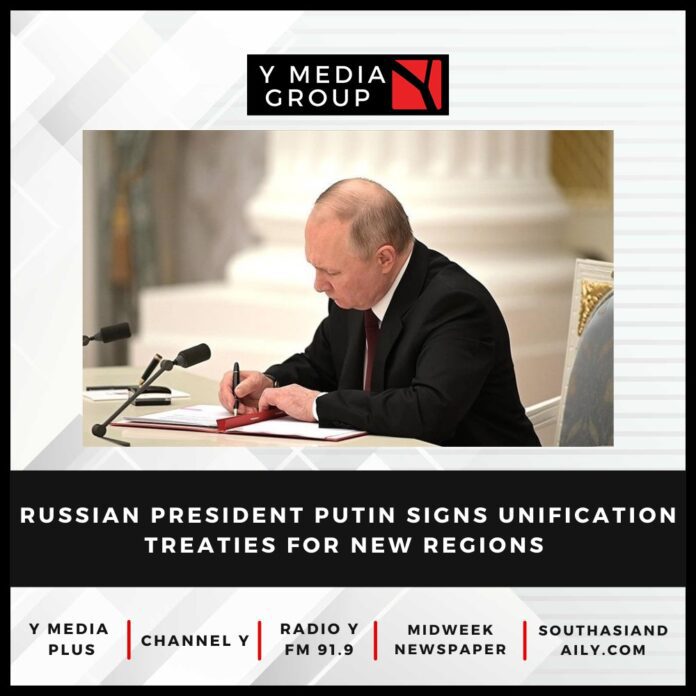 Earlier the documents were unanimously endorsed by the Federation Council, the upper house of the Russian parliament. The agreements were ratified on Monday by the State Duma, the lower house of parliament, after they were certified as lawful by the country’s Constitutional Court over the weekend, RT reported.

The agreements were signed by Putin and the heads of the four former Ukrainian regions on Friday, after the residents of the territories overwhelmingly backed the idea of joining Russia during referendums held between September 23 and 27. The votes have been firmly rejected by Kiev and its Western backers, who have vowed to never accept their results nor recognize the four regions’ accession, RT reported.

The DPR and LPR split from Ukraine in 2014 in the aftermath of the Maidan coup and the civil conflict in the country’s east that followed. Shortly after launching a military operation in February this year, Russia seized Kherson Region and a larger part of Zaporozhye Region.

Russia sent troops into Ukraine on February 24, citing Kiev’s failure to implement the Minsk agreements, designed to give the regions of Donetsk and Luhansk special status within the Ukrainian state. The protocols, brokered by Germany and France, were first signed in 2014. Former Ukrainian President Pyotr Poroshenko has since admitted that Kiev’s main goal was to use the ceasefire to buy time and “create powerful armed forces”.

In February 2022, the Kremlin recognised the Donbass republics as independent states and demanded that Ukraine officially declare itself a neutral country that will never join any Western military bloc. Kiev insists the Russian offensive was completely unprovoked.