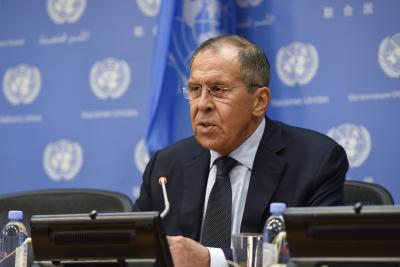 Unconfirmed reports persist that Putin, who is turning 70 this year, suffers from deteriorating health issues and may have been diagnosed with cancer and Parkinson’s.

In an interview with French TV, Lavrov said no one “sane” could see any signs of illness in Putin, who reportedly has his food tested before eating it and bans his staff from standing too close to him,Daily Mail reported.

The update comes as the fighting intensifies in Ukraine’s east, with Moscow and Kyiv’s forces spilling blood for control of Severodonetsk, a city in the Luhansk Oblast.

“You can watch him on screens, read and listen to his speeches,” Lavrov said in comments released by the Russian Foreign Ministry, Daily Mail reported.

“I leave it to the conscience of those who spread such rumours.”

His statements come amid reports that the Kremlin was reusing old footage of Putin for several meetings.

An FSB officer was quoted in media outlets that Putin has just three years left to live as speculation abounded over his health.

Reports about Putin’s health have conflicted, with accounts differing on whether Putin has thyroid, abdominal or blood cancer, Daily Mail reported.

His comments suggested the Ukrainians believe Putin is suffering from cancer, but are unclear on how severe the condition could be and to what extent it could impede Putin’s ability to direct Russian military strategy and exert influence over the country.