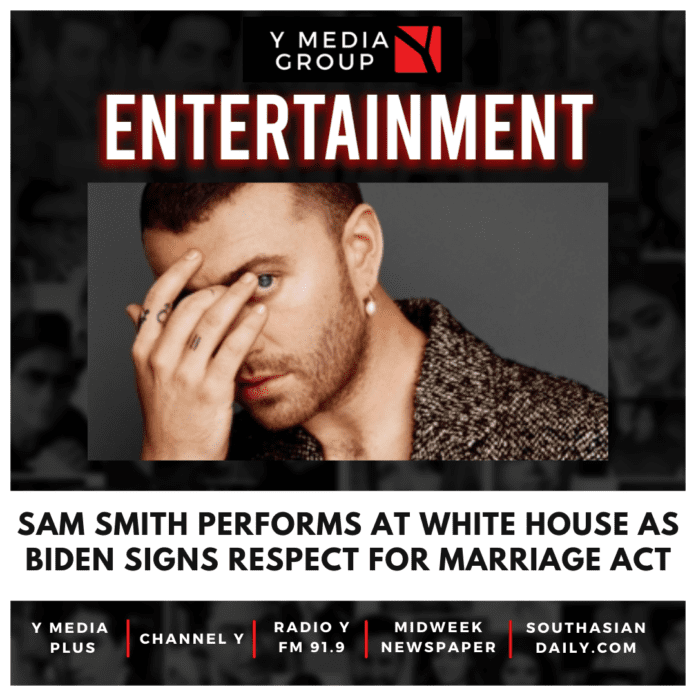 Hollywood star Sam Smith performed at the White House as Americans in the LGBTQ+ community celebrated a landmark agreement on Tuesday.

December 13 marks a significant day in American history after President Joe Biden passed the Respect for Marriage Act, which guarantees same-sex and interracial married couples to have the same rights as legally married spouses in all 50 US states, reports mirror.co.uk.

The signing of the federal law means that there will be protection in the event the Supreme Court overturns Obergefell v Hodges and Loving v Virginia, which legalised same-sex and interracial marriages respectively.

Before the signing, the South Lawn of the US presidential residence was the venue for a heartfelt ceremony where four-time Grammy Award winning artist Sam gave a rendition of ‘Stay With Me’.

They stepped out in front of the bipartisan crowd wearing an open white shirt coupled with a smart slightly oversized black coat and accessorised with a tiny pink purse as they belted out a note-perfect display alongside a keyboard player and three backing vocalists.

They were followed by performances from Nashville’s Joy Oladokun, who identifies as queer woman of colour, and LGBTQ+ advocate Cyndi Lauper.

Lauper took to the stage to perform 1986 hit ‘True Colours’, before telling the crowd: “This time, love wins.”

She later appeared in the White House briefing room and delivered a short speech, she said: “I came here because I wanted to say thank you to President Biden, Speaker Pelosi, Vice President Harris and all the advocates in his team.

“For once, our families, mine and a lot of my friends, people you know, sometimes your neighbours, we can rest easy tonight because our families are validated.

“Because now we are allowed to love who we love, which sounds odd to say, but Americans can now love who we love. Bless Joe Biden and all the people who worked on this for allowing people and their children not to worry about their future.”