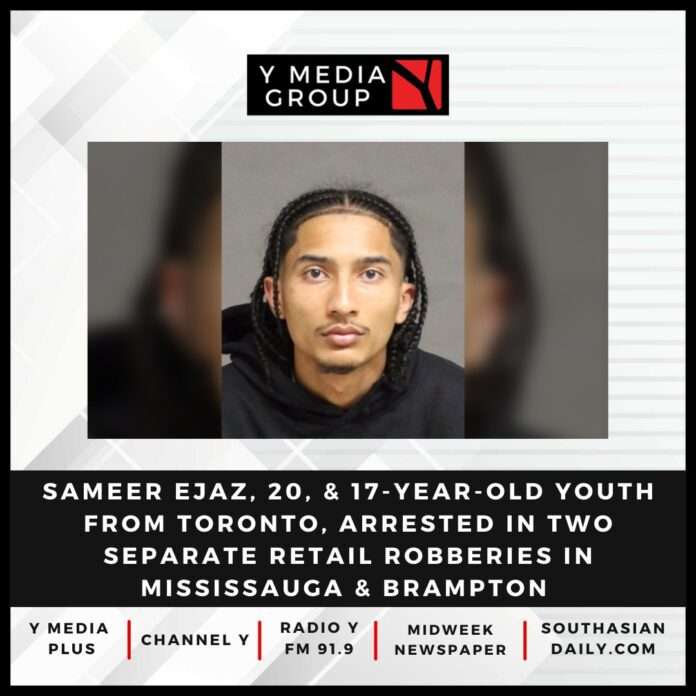 On Monday, December 12, 2022, at 2:30 pm, a gold exchange store in the area of Dundas Street and Hurontario Street in Mississauga was robbed by five masked suspects who made demands for cash and gold. Two of the which were armed with firearms. The suspects fled with a quantity of currency and gold; and were seen entering a grey Honda CRV, which was operated by a sixth suspect. The victim sustained minor physical injuries.

Later on December 12, 2022, at 6:35 pm, two masked suspects entered an electronics store in the area of Fogal Road and Highway 50 in Brampton. Both suspects were armed with firearms and made demands for cell phones. A number of phones were placed into a bag, and the suspects fled the store. The suspects were again seen entering a grey Honda CRV. No physical injuries were sustained.

Shortly after, at approximately 7:15 pm, investigators located the suspect vehicle in the area of Islington Road and Albion Road in Toronto. The vehicle was occupied by two suspects alleged to have been involved in both robberies.

The Peel Regional Police – Central Robbery Bureau, with the assistance of the Toronto Police Service 23 Division Major Crime and Tactical Units, conducted a coordinated takedown, and the suspects were arrested without incident.

A loaded 9mm Glock handgun and one replica handgun were recovered. Additionally, all cell phones were also recovered. The vehicle used in the robberies was determined to be stolen from the Toronto area.

Sameer Ejaz, 20, of Toronto, has been charged with the following Criminal Code Offences:

A 17 year old youth from Toronto has also been charged with the following Criminal Code Offences:

Both charged persons were held for a bail hearing and appeared before the Ontario Court of Justice on December 13, 2022. None of the allegations have been proven in court of law.

A general provision of the Youth Criminal Justice Act (Y.C.J.A.) prohibits the release of the name of a Young Person and, therefore, the identity of the Young Persons charged in this investigation are protected.

“Excellent work and display of inter-agency coordination with the Toronto Police Service in effecting these arrests in a safe and timely manner. These criminal acts have no borders, Peel Regional Police remain committed to community safety and well-being as it’s top priority through continuous collaboration with our GTA partner agencies in apprehending those responsible.” A/Superintendent Sean Brennan, Peel Regional Police Investigation Services

These investigations are ongoing and there are suspects that remain outstanding. Anyone with information regarding this incident is asked to contact investigators with the Central Robbery Bureau at (905)453-2121 ext. 3410. Information may also be left anonymously by calling Peel Crime Stoppers at 1-800-222-TIPS (8477), or by visiting peelcrimestoppers.ca.