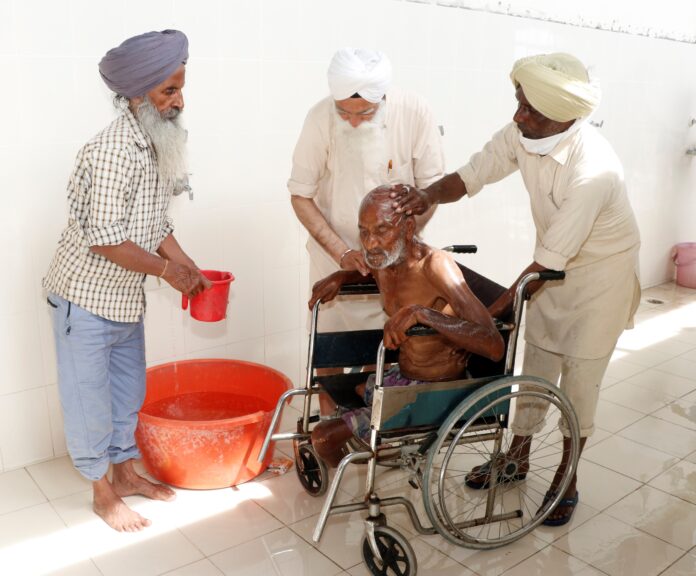 A living example of selfless service to humanity Dr Naurang Singh Mangat will be visiting
Brampton-Mississauga from October 8 (morning) to Oct 11 (Noon). During his visit, he will stay at Sri
Guru Singh Sabha Gurdwara, Malton. For the last 17 years he has been looking after and trying to save
lives of the destitute, homeless, blind, disabled, mentally challenged and poor sick people lying on the
streets of Punjab.
It was in 2005 that Dr. Mangat went to Punjab and began cycling around Ludhiana city providing
free medical care to homeless and sick people lying on the roadsides and at other places. His untiring
efforts to help the homeless sick have now taken the shape of three-storey building which is located
near village Sarabha of Ludhiana district.
Till today this registered charity called “Guru Amar Das Apahaj Ashram” has admitted about 950
patients. Many were rehabilitated after medical treatment and some expired due to their critical
medical condition. However, nearly 200 patients are living in the Ashram permanently. Of these 125
are mentally challenged. About 75 are bedridden and unable to answer the call of nature on their
own. Some have total memory loss. These patients are provided food, clothes, medical treatment,
nursing care – ALL FREE OF COST. Out of these, 75 patients are living in the three story building.
However, the remaining 125 male patients are living in makeshift steel shacks.
Dr Mangat who is a former Professor and Scientist of PAU, Ludhiana, University of Windsor, and
Morrison Scientific Calgary said that on completion of the new building being constructed, the Ashram
would be able to move these male patients living in the temporary iron sheds to the new multi-storey
building. Ashram has employed 35 people to look after these patients. These include a doctor, nurses,
care takers, security guards and some for preparing food. As the Charity has no source of income, the
expenses running into lakhs of rupees per month are supported by the Public.
For more information, Dr Mangat can be reached at his India cell phone 95018-42506; Canada cell
phone 403-401-8787 or at nsmangat14@hotmail.com