Security tightened at Delhi borders, Metro ahead of farmers’ mahapanchayat 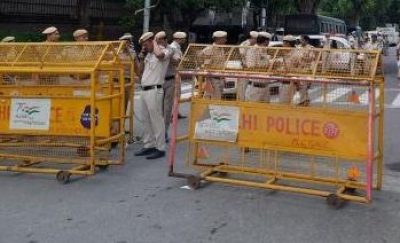 The Delhi Police has made elaborate security arrangements to avoid any untoward incidents ahead of the mahapanchayat called at the capital’s Jantar Mantar by various farmers’ groups, an official said on Sunday.

The Delhi Police said the gathering of the farmers can cause traffic problems and untoward incidents can take place. It has deployed a large number of personnel in border areas and put up barricades.

Special Commissioner of Police, Law and Order, Dependra Pathak, said that they have requested the farmers to go back.

Police officials said that they got to know that Sanyukt Kisan Morcha and various farmer groups had planned to organise a mahapanchayat at Jantar Mantar.

“Keeping in mind the gravity of the situation, we have put up barricades to avoid untoward incidents. A large number of police personnel have been deployed at the border areas and intersections along with railway tracks,” the police said.

The Metro has also been put on high alert. Police will also be deployed there.

As per information, farmer leader Rakesh Tikat was stopped by police personnel at Ghazipur border while he was going to Jantar Mantar and asked to go back. When he didn’t budge, he was detained and taken to Madhu Vihar police station.