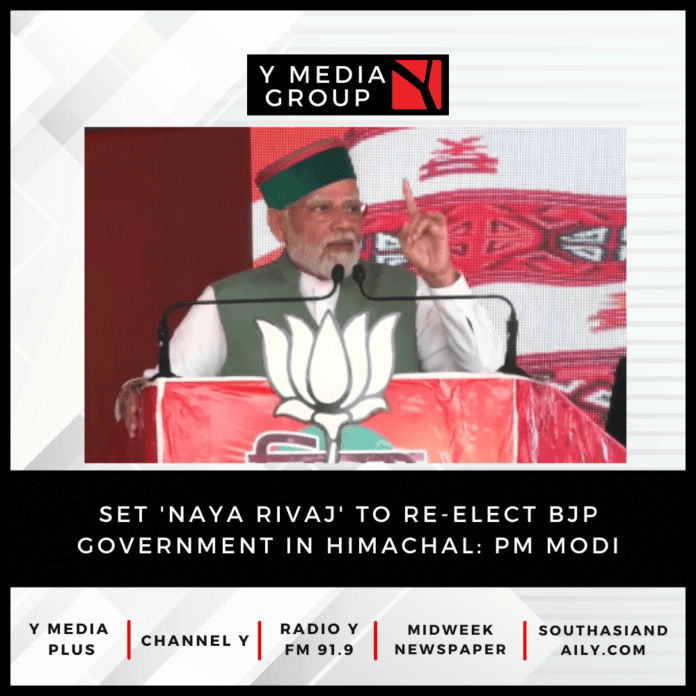 Launching his election campaign, Prime Minister Narendra Modi on Saturday pleaded electorates in this Himachal Pradesh town with a promise to set ‘naya rivaj’ (new tradition) to re-elect the BJP government in the state.

Eyeing to woo female voters, who outnumbered male voters in every election, he asked them to visit door to door in this area to convey “my greetings” to them as this time elections are very crucial.

“The people of Himachal are determined to make a strong comeback of the BJP government. This land of soldiers, this land of brave mothers, when it takes a resolution, it only shows it by proving it,” said Modi, who donned a Himachali cap, in his nearly 40-minute address in this town in Mandi — the home district of Chief Minister Jai Ram Thakur.

On his arrival, Modi was extended rousing reception by party workers and sympathizers, some donning traditional dresses. Many women were present en route, waving their hands at the Prime Minister’s arrival.

The Prime Minister said this time Himachal’s election is special. “This time, one vote each, to be held on November 12, will decide the development journey of Himachal for the next 25 years.”

Trying to build an emotional bond, Modi said: “I have visited Sundernagar several times before. I have also trekked inaccessible areas of Siraj, Kullu, Kinnaur, Chamba and Kangra. The roads here, such a beautiful BBMB lake of Sundernagar, how can anyone forget.”

Taking a jibe at the state’s main opposition Congress on the day it launched its poll manifesto, the Prime Minister said for the party staying in the government has been like running erstwhile kingdoms.

“Making false promises and giving false poll guarantees has been an old trick of the Congress. The country is witnessing that to how the Congress has been lying in the name of loan waiver of the farmers.”

Batting for a double-engine government that has given the state new infrastructure in every step, Modi emphasized that when there was the BJP government in Delhi and Himachal, the work was going on a fast pace.

“But as the Congress comes back, all development comes to a standstill.”

The Congress has always downplayed the role of Himachal Pradesh in national politics because they felt that the state was small and sent three-four members to the Parliament. “These were the reasons why Himachal never reached the heights of development.”

Amidst chants of “Modi-Modi” by the audience, largely the women, the Prime Minister was categorically clear in saying that development in the state was possible as people have voted the BJP to power both in the Centre and in the state.

“Today with the double-engine government, gas cylinders have reached every household. Electricity has reached everywhere, roads have also been built, water has also reached.”

Playing the religious card, Modi said the BJP has resolved to build Ram Temple. “Today such a grand Ram temple is being built in Ayodhya.”

Paying tributes to Shyam Saran Negi, 106, the first voter of independent India who cast his 34th vote for the forthcoming Assembly polls three days ago, who passed away at his native place Kalpa on Saturday, Modi said when he was coming from Delhi, he received the unfortunate news of the demise of India’s first voter.