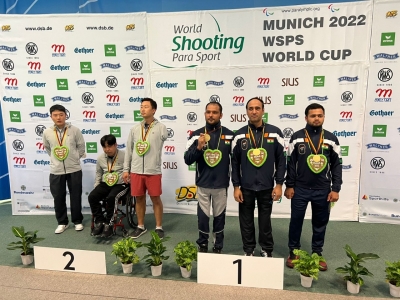 India bagged two gold medals on the last day of the World Shooting Para Sport (WSPS) Para Shooting World Cup in Munich on Tuesday with Paralympian Singhraj figuring in both the achievements.

With two more golds, India topped the medal tally, finishing with a total of 10 medals — six gold, three silver and one bronze medals — in the World Cup.

Singhraj, who won two medals in the Tokyo Paralympic Games, on Tuesday claimed gold in the individual 50-metre Pistol Mixed Event and then combined with teammates Manish Narwal and Deepender to pocket the gold in the team event.

The Indian paralympian finished fourth in the qualifying round with a score of 529, after a tie with JO Jeongdu of South Korea. The Korean finished third with six shots into the inner circle while Singhraj managed five such hits.

Oleksii Denystuk claimed the silver medal with a score of 216.2 while JO Jeongdu of South Korea took the bronze medal with a total of 193.9. Deepender finished sixth with a total score of 133.0, getting eliminated in the third series.

In the other competitions on the final day, Swaroop Unhalkar failed to qualify for the final, finishing 25th in the R3 – Mixed 10m Air Rifle Prone SH1 event.

India had won two silver medals through Deepender Singh in the 10m Standard Pistol event. He along with Rahul Jakhar and Anurodh Panwar bagged the silver in the team event of Standard pistol event.