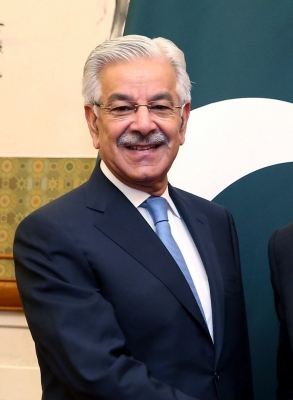 Pakistan Defence Minister Khawaja Asif alleged on Wednesday that a “negative” social media campaign targeting the tragic incident of an army helicopter crash amid flood relief operations in Balochistan earlier this month was a “joint project” of the PTI and India against the Pakistan Army, media reports said.

Addressing the issue at a press conference in Islamabad on Wednesday, Asif said 18 Indian accounts were found to be involved in the social media campaign, the report said.

“Their channels say, �the work Imran Khan is doing for us, even if we had spent billions of dollars we would not have been able to create the kind of network to safeguard and advance India’s interests in Pakistan as how the PTI and its leader is doing’,” the Defence Minister said.

Referring to reports run in the media a day ago, Asif said an investigation into the campaign had found that 529 Pakistani accounts, 18 Indian accounts and 33 accounts from other countries were involved.

“This investigation is reaching its conclusion,” he said, adding that action would be taken on the results in accordance with the law and the Constitution.