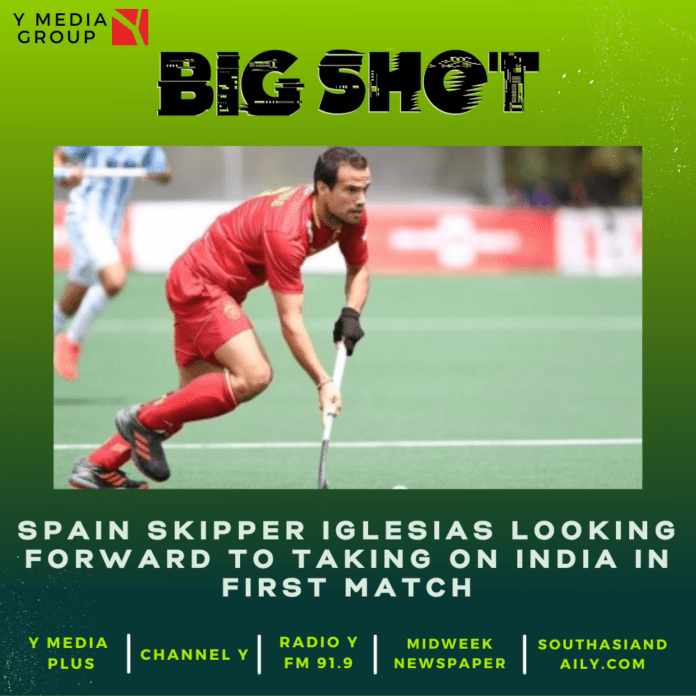 Playing India in India on the opening night of a mega event is the most exciting game and Spain captain Alvaro Iglesias is looking forward to taking on the hosts in the last match of the opening day of the FIH Odisha Hockey Men’s World Cup 2023 Bhubaneswar-Rourkela.

Spain men’s hockey team will open its campaign against the hosts India in Rourkela on January 13 and as per Iglesias, it is the most exciting challenge for any opposition in the world.

“I think it’s the most exciting game you can play. If someone asks anyone which game they want to play, probably everyone will say they want to play against India in India in the opening match of the World Cup. It will be great. The preparation has been good. We have been training a lot together and we are waiting for the moment,” he said.

“We know the stadium in Rourkela is bigger. We know there will be a lot more crowd there. It will be hard to listen to our teammates and the instructions from the referee as well. But it will be an incredibly exciting atmosphere and we are really looking forward to playing here,” he was quoted as saying by Hockey India in a release on Sunday.

The arrival of India’s group stage rivals Spain and Wales in Rourkela on Sunday energised the city’s atmosphere ahead of the World Cup. Both teams reached Rourkela from Bhubaneswar through Charter Flights.

Spain head coach Max Caldas kept his cards close to his chest when asked about his tactics going into the first match against India. “The plan is to go to the hotel, have some rest, and have some food and take it easy,” he said.

Spain played against India and New Zealand in the FIH Men’s Hockey Pro League 2022/23 recently and coach Caldas said that his team is used to playing in India now and that will improve their game.

“It’s an honour and joy for us to come back to India. We love coming here. We are looking forward to the challenges. When you are at ease at any place, you tend to feel better and then play better. And we feel at ease in India,” he said.

All the match tickets in Rourkela are sold out. When asked if the massive crowd at the stadium will affect his team’s focus during match days, Spain’s Head Coach said: “I think it will be challenging for all to compete in Rourkela. Because of the pandemic, we have forgotten how to play in front of big crowds. But we are not going to focus on that too much. We will focus on ourselves.

“It’s a 16-team tournament. We are a young, fast team and we are going to play to our guns and see how we go,” he signed off.

Coach Newcombe emphasised that his team should not be underestimated in the competition despite Wales’ current ranking of 15 in the world.

“We are going to play three brilliant hockey teams – India, England, and Spain. We know that it will be tough. But we are here to cause some upsets. We are here to win hockey games. I don’t think people will be taking us lightly,” he said.

On being asked if the Rourkela weather would be a challenge, the coach said that his team might actually enjoy the heat in Odisha as compared to the wet and cold weather in Wales.

“It does not feel too hot. We played in Malaysia and it was quite hot out there. We are used to playing in India in the summer. So this is fine. It’s cold and wet in Wales as of now, so we are actually excited to get some heat,” he said.

Meanwhile, Wales skipper Rupert Shipperley said that playing in front of over 20,000 spectators in Rourkela will bring out its own challenges. But he added that he hopes his team will be able to entertain the fans and gain support from the crowd.

“The boys are really looking forward to getting out on the pitch in front of that many spectators. It brings out its own challenges. It’s not something we do regularly,” Shipperley said.

“We will be looking to gain a few supporters while we are here in India, maybe if not against India, then maybe certainly against some of the other oppositions. We want to entertain, that is why we are here. So that people enjoy watching us and the kind of hockey we play. We hope to get fans behind our side,” he added.