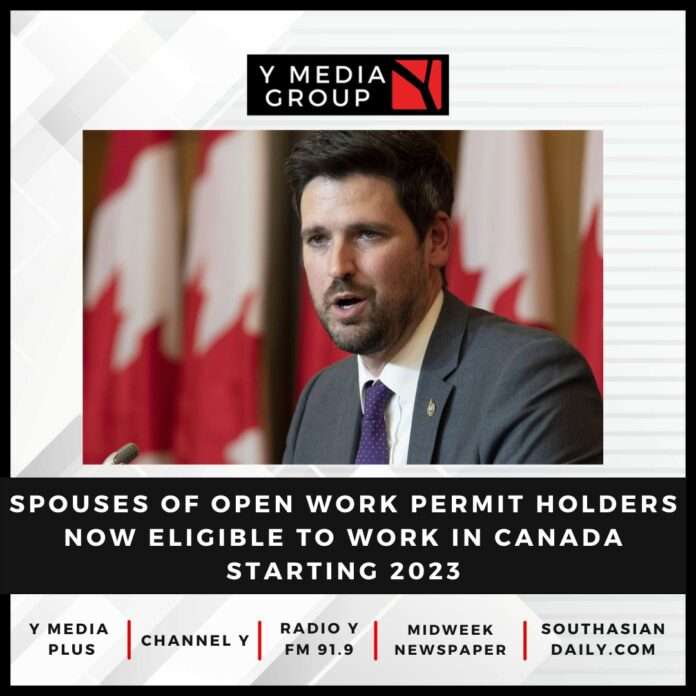 In a bid to keep families of open work permit holders together, which include many Indians, Canada has announced that starting 2023 their spouses will be eligible to work in the country.

Open work permits allow foreign nationals to legally work for any employer and in any job in Canada.

“Today we are making an announcement that will make it easier for employers to find workers and for families to remain together while they’re here,” Sean Fraser, Canada’s Minister of Immigration, Refugees and Citizenship, announced on Friday.

“Today, I’m announcing that we’re expanding open work permit eligibility for spouses and dependent children of principle applicants who come through a variety of temporary programs,” he added.

The move will allow more than 200,000 workers who have family members in Canada, or that will be coming to the country, to continue to be with their loved ones and work while they’re here to support themselves, the Minister said.

With the new policy shift, the Immigration Refugees and Citizenship Canada (IRCC) expects more than 100,000 spouses to fill gaps in the labor force.

This policy change, according to Fraser, will be implemented in three phases to allow people to continue to come and be with their families who are not simply amongst the highest skilled professions.

The first Phase involves people who come through a high wage stream to the temporary foreign worker program, the international mobility program and the postgraduate work program. This is expected to be launched early in the new year.

The second phase will seek to expand access to the same rules for people who come in through a lower wage stream, “so people who are here making a contribution to Canada’s economy don’t have to make the tough decision to be apart from their children and their spouse while they do”. Fraser said.

This phase will take root after consultations with Canadian provinces and territories.

The third phase, the programme will be expanded to include families of agricultural workers, which would again require consultations with provinces and territories.

Fraser said that the move will not only plug the gaps in the Canadian labour market, but will also make the immigration system more “compassionate”.

“By recognising that a person who is here making a contribution to our economy, deserves to be with their loved ones while they make that contribution,” he said.

The policy change is likely to have an incredible impact on the Canadian economy, which lost almost $13 billion over the past year due to a nationwide labour and skill shortage in the manufacturing sector, according to a labour survey.

The most recent job vacancy data showed there were 958,500 open roles in Canada in August and one million unemployed people.

To address acute labour shortage, Canada unveiled its ambitious immigration plan last month to welcome half a million immigrants each year by 2025.