Starc, Marsh, Stoinis to miss upcoming T20Is against India due to injuries 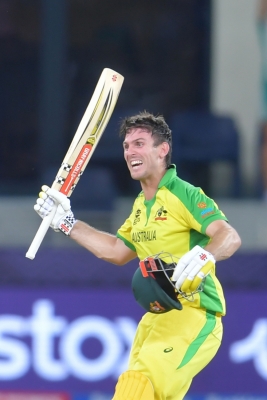 Australia trio of left-arm pacer Mitchell Starc, all-rounders Mitchell Marsh and Marcus Stoinis are set to miss the upcoming T20I series against India due to injuries.

Opener David Warner had already been rested from the trip and now, Starc (knee), Marsh (ankle) and Stoinis (side strain) have been ruled out of the short tour of India.

“Selectors felt with three games in six days across three cities — including travel to India and internally — Marsh, Stoinis and Starc are best served remaining in Australia to prepare for the ICC Men’s T20 World Cup,” said a statement from Cricket Australia (CA).

Earlier, a report in cricket.com.au said pacer Nathan Ellis, all-rounders Daniel Sams, and Sean Abbott will be the replacements for the injured trio on their trip to India, with matches to take place on September 20, 23 and 25 in Mohali, Nagpur and Hyderabad respectively.

The last time Australia played a T20I series against India, it was in 2019, where Australia won two-match series 2-0.

Marsh and Stoinis were injured during Australia’s ODI series against Zimbabwe at Townsville and against New Zealand at Cairns. But Starc, their pace spearhead, is a late exclusion from the tour to India after a scan on his knee in Sydney on Wednesday.

The trios absence means that Australia will have some changes to their desired playing eleven on tour of India.

“The absence of Stoinis all-but guarantees Tim David will make his Australian debut on the tour as a middle-order finisher, and gives him the chance to make it difficult for Stoinis to force his way back into the side.”

“Marsh’s absence could see Steve Smith move back up to No.3 with allrounder Cameron Green coming into the side, while Josh Inglis is likely to partner Aaron Finch at the top of the order with Warner rested from the tour for family time,” added the report.

After playing three T20Is against India, Australia will play home T20I series against the West Indies and England in the lead-up to their Men’s T20 World Cup title defence at home.

The Aaron Finch-led side will fly to India early on Thursday to acclimatise to the conditions and kickstart training ahead of first T20I at Mohali on September 20.

Australia will have a warm-up match against India at The Gabba, Brisbane before starting their Men’s T20 World Cup campaign at home against New Zealand on October 22 in Sydney.

Share
Facebook
Twitter
Pinterest
WhatsApp
Previous article
Mandhana scores half-ton as India women thrash England to level T20I series 1-1
Next article
What is the SCO and why PM Modi’s presence at its Samarkand summit is important?