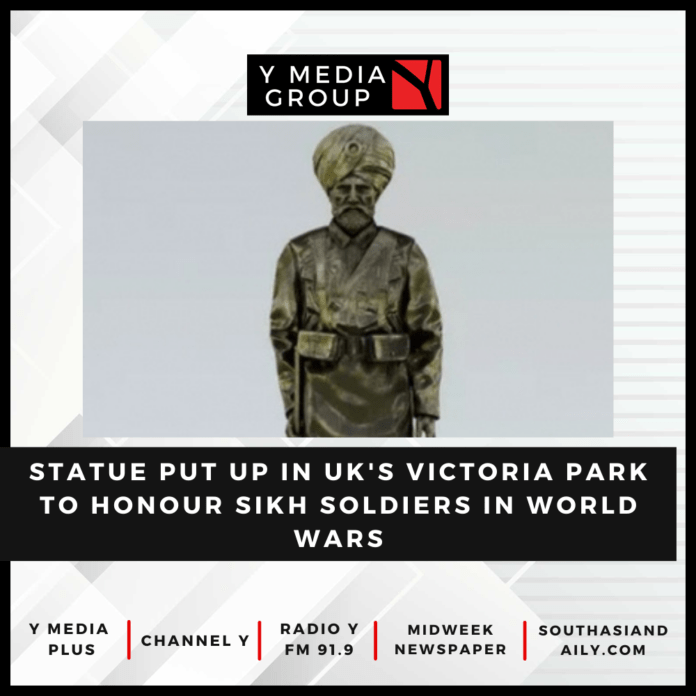 To recognise the contributions of Sikhs who fought in World Wars for the UK, a bronze statue of a Sikh soldier will be unveiled on Sunday at the Victoria Park, Leicester, the city that witnessed communal clashes in August this year.

Sikhs from India played a key role in the British army during the two World Wars. They accounted for less than 2 per cent of India’s population during the Great War, but made up almost 20 per cent of the British Indian Army at the outbreak of hostilities.

The statue will be placed on a granite plinth within the grounds of Victoria Park, which is next to the University of Leicester campus.

It will form part of the Centenary Walk which leads to the Arch of Remembrance and many other memorials already set within the grounds.

“We are so proud to be unveiling this memorial to honour the sacrifice of all those brave men who travelled thousands of miles to fight for a country that wasn’t their own,” Ajmer Singh Basra, President of the War Memorial Committee, told Leicester Times.

“The statue will also serve as a reminder for Sikhs who have made Leicester their home since the 1950’s,” Basra added.

The idea of the statue, which was envisaged by late Councillor Culdipp Singh Bhatti MBE and designed by artist Taranjit Singh, took shape with the help of the Sikh Troops Memorial Committee.

It has been funded by donations from Sikh congregations, the wider public and city council community ward funding.

The unveiling will begin at De Montfort Hall and will be open to the public. It will be attended by families of the Sikh World War heroes and a number of dignitaries, including Leicester’s deputy city mayor for culture, leisure and sport, Councillor Piara Singh Clair.

The Sikh community takes part in the annual remembrance commemorations at Victoria Park in November each year.

Punjabis of all faiths — including Hindus, Muslims and Sikhs — made up about a third of the Indian army, and about one sixth of all the British empire’s overseas forces, The Guardian reported.

Recently, records of 320,000 troops from Punjab (undivided) who fought in the first World War were disclosed by UK-based historians to offer new insight into the contribution of Indian soldiers to the allied war effort. They were lying in a basement in Lahore for 97 years.

In the 1951 Census, just 624 people with South Asian heritage were recorded as living in Leicester. Now, 70 years on, the city has one of the highest proportions of British South Asians.

Leicester has long been heralded as a socially cohesive unit with a sizeable number of Muslims, Sikhs and Hindus from India and Pakistan living harmoniously alongside each other.

The recent clashes, following an India-Pakistan cricket match in August, came as a shock to many and upset the multicultural apple cart.

Britain’s Indian-origin Home Secretary, Suella Braverman, had blamed the riots on uncontrolled migration into the UK and the failure of newcomers to integrate.

Share
Facebook
Twitter
Pinterest
WhatsApp
Previous article
Y Media Exclusive: I Will Not Be Silenced, Will Fight This Injustice: Former Mayoral Candidate Nikki Kaur Says After Getting Terminated From Her Job At The City Of Brampton
Next article
Pakistani Suspected Of Al-qaeda Links Released By US After 19-year Detention