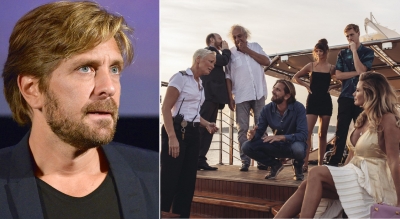 Hours after Delhi’s Shaunak Sen became the second Indian in two years to win the Golden Eye for the best documentary film, the much-awaited top awards of the 75th Cannes Film Festival were announced on Saturday night.

Swedish filmmaker Ruben Ostlund won his second Palme d’Or for ‘Triangle of Sadness’, a biting satire of the shallow worlds of fashion and wealth, bringing the 2022 Cannes Film Festival to a close, reports ‘Variety’.

Ostlund’s follow-up to his 2017 Palme-winning ‘The Square’, according to ‘Variety’, takes a boat full of shallow people — models, millionaires and their various trophy partners — and abandons them in deep water, forcing the survivors to reconstruct a desert-island society where money holds no power. In such a system, for better or worse, beauty becomes the most valuable asset.

The jury spread the wealth with its awards, presenting three more prizes than is typically expected of them — two ties and a special 75th anniversary award.

Denis’s divisive — but undeniably seductive — tropical drama, according to ‘Variety’, has Margaret Qualley, Hollywood star Andie MacDowell’s daughter, play an American journalist whose assignment in Nicaragua has run its course, forcing her to use her wits and wiles to find a way out of the country, with the help of a seductive stranger (Joe Alwyn, more famous as Taylor Swift’s partner).

‘Close’, on the other hand, is a more straightforward (and less controversial) film, which moved many to tears with its portrayal of a tragic rift between two 13-year-old friends.

Korean director Park Chan-Wook won the best director honours for ‘Decision to Leave’, described by ‘Variety’ as a Hitchcockian thriller in which a detective falls for the widow of a murder victim. He convinces himself that the suspect is innocent, but then they face one another again years later, when her second husband also dies under violent circumstances.

Zar Amir-Ebrahimi, who plays an Iranian reporter risking her own life to catch a serial killer in ‘Holy Spider’, was named the best actress. The tense true-crime thriller, accoring to ‘Variety’, is about a man who targeted prostitutes, and it turns ]more chilling when he is arrested and audiences realise that a segment of society supports his actions against sex workers.

The strong Asian flavour of the awards was completed by Pakistan’s ‘Joyland’ (directed by Saim Sadiq) getting the Queer Palm and Nepalese director Abinash Bikram Shah’s ‘Lori’ getting a special mention in the Short Films section, apart from of course the Golden Eye that Shaunaq Sen got for his documentary, ‘All That Breathes’.

Tarik Saleh won the screenplay award for ‘Boy From Heaven’, which imagines a conspiracy by the Egyptian government to meddle in the appointment of a new grand imam.

Banned from Egypt, Saleh was obliged to shoot the film in Turkey. “I want to dedicate this prize to the young filmmakers in Egypt, to raise your voices and tell your stories,” he said in his acceptance speech.

The Camera d’Or for best first film went to ‘War Pony’, by Gina Gammell and Riley Keough, who, incidentally, is Elvis Presley’s granddaughter. It tells the story of two young men from the Oglala Lakota tribe in South Dakota, USA, and was written and made in close collaboration with the Native American community it depicts. A special mention was awarded another debut, Japanese director Hayakawa Chie’s ‘Plan 75’, which imagines a future in which elderly citizens can elect to be euthanised.

In an unusual move, says ‘Variety’, the jury prize was presented as a tie between ‘The Eight Mountains’ and ‘EO’.

Co-directed by Belgian couple Felix Van Groeningen and Charlotte Vandermeersch (who made out on stage, mid-speech), ‘The Eight Mountains’ tracks the friendship between two Italian boys, one from the city and the other a shepherd boy from the Alps, across decades.

Polish director Jerzy Skolimowski’s ‘EO’ is all about the trans-European journey of a donkey through a series of challenging and often cruel interactions with various humans.