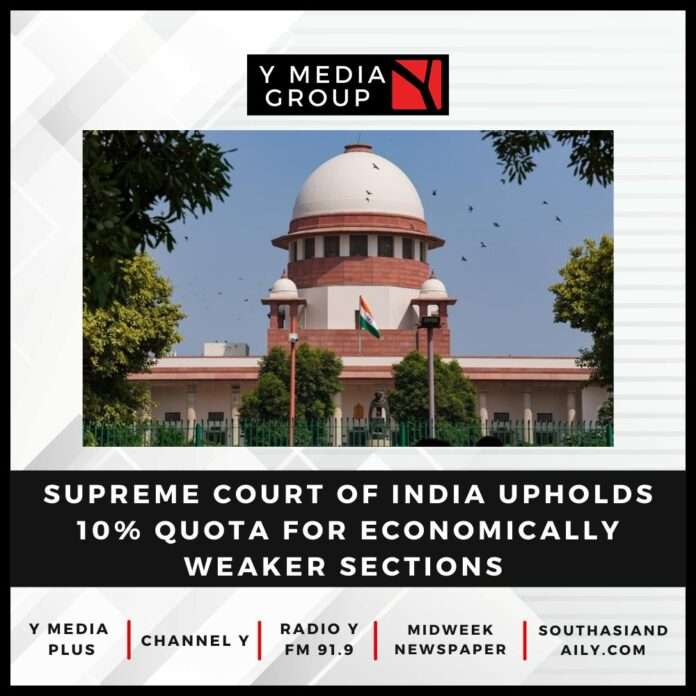 Supreme Court judge Dinesh Maheshwari — while upholding the constitutional validity of the 103rd Constitution amendment providing 10 per cent reservation to economically weaker sections (EWS) persons in admissions and government jobs — said EWS reservation does not cause any damage to the basic structure of the Constitution on account of breach of the ceiling limit of 50 per cent for reservation.

Justice Maheshwari said this ceiling limit, though held attached to the constitutional requirements, has not been held to be inflexible and inviolable for all times to come.

“Reasons for this are not far… to seek reservation by affirmative action is not having trappings of any such essential feature of the Constitution, collectively enumerated by Kesavananda (case) and successive decisions, that its modulation with reference to any particular compelling reason or requirement could damage the basic structure of the Constitution,” he said.

Justice Maheshwari said the prescription of ceiling limit of 50 per cent, being apparently for the benefit of general merit candidates, does not provide any justified cause to the candidates standing in the bracket of already available reservation to raise any grievance about extra 10 per cent reservation for the benefit of another section of society in need of affirmative action.

“In any case, there is no question of violation of any such basic feature of the Constitution that the entire structure of equality of opportunity in Article 16 would collapse by this EWS reservation,” he added.

He further added that if at all the cap of 50 per cent is the final and inviolable rule, the classes already standing in the enabled bracket of 50 per cent cannot justifiably claim their share in the extra 10 per cent, which is meant for a separate class and section, i.e., economically weaker section.

He noted that in Indra Sawhney (case), Justice Jeevan Reddy, speaking for the majority, though made it clear that reservation contemplated by Article 16(4) should not exceed 50 per cent, yet left that small window open where some relaxation to the strict rule may become imperative in view of the extraordinary situations inherent in the great diversity of our country.

“As an example, it was pointed out that the population inhabiting farflung and remote areas might, on account of their being out of the mainstream of national life and in view of the conditions peculiar to them, need to be treated in a different way,” Justice Maheshwari said.

He added that the argument regarding the cap of 50 per cent is based on all those decisions by this court which were rendered with reference to the reservations existing before the advent of the amendment in question. “The 50 per cent ceiling proposition would obviously be applied only to those reservations which were in place before the amendment in question. No decision of this court could be read to mean that even if the Parliament finds the necessity of another affirmative action by the State in the form of reservation for a section or class in need, it could never be provided,” he said.

He added against the above backdrop, the relevant decisions of this court in regard to this 50 per cent ceiling limit could be referred but, while reiterating that these decisions are applicable essentially to the class/classes who are to avail the benefits envisaged by Articles 15(4), 15(5) and 16(4) of the Constitution.