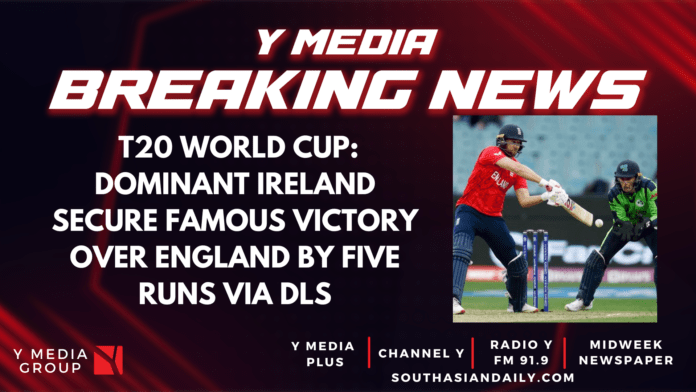 A dominant Ireland sprung a huge upset in the ongoing T20 World Cup with a five-wicket victory over 2010 champions England by five runs via DLS method in a Group 1 match in Super 12 stage at the iconic Melbourne Cricket Ground (MCG) on Wednesday.

Wednesday’s win is also just the third victory for Ireland over England in Men’s international cricket after ODI wins in Bengaluru 2011 (in the World Cup) and Southampton 2020 and also their first time win in T20Is too.

The five-run win over England also adds to Ireland’s incredible upswing in T20Is, after bowing out of last year’s T20 World Cup in the first round and then defeating West Indies in a decisive first-round match in Hobart to enter Super 12 stage of this year’s tournament.

After Ireland captain Andrew Balbirnie (62 off 47 balls) and Lorcan Tucker (34 off 27 balls) strung an 82-run stand to help the side post a competitive 157 all out in 19.2 overs, pacer Joshua Little took out Jos Buttler and Alex Hales to reduce England to 24/2 in four overs, setting the base for a famous victory as England could manage 105/5 in 14.3 overs.

After that rain arrived and gave Ireland their first two points in Super 12, leaving Group 1 wide open. It also makes England’s next match, against arch-rivals Australia, a must-win affair in order to remain alive in the race for a spot in the semifinals.

In defence of 158 on a tricky pitch and overcast conditions, Little dealt England a huge blow when he had Buttler caught behind off a thin edge for a two-ball duck in the opening over. Alex Hales was next to depart in Little’s second over, as short fine leg took a nice catch of the top-edge flying off the bat.

Fionn Hand, coming into the playing eleven in place of off-spin all-rounder Simi Singh, bowled Ben Stokes with a screamer of a delivery through the gate for just six as England finished the powerplay at 37/3. Post power-play, Harry Brook and Dawid Malan were gifted lifelines but didn’t make much use of it.

While Brook was caught in the deep while trying to pull off George Dockrell, Malan’s struggle came to an end when extra bounce on his pull was snapped by diving third man off Barry McCarthy as England were in deep trouble at 86/5 in 13.1 overs.

Moeen Ali slammed two sixes and a four to give England some hope of an unlikely win. But rain arrived when England needed 53 runs off 33 deliveries, leaving Ali stranded at 24 not out off 12 balls as they were found five runs short of par score as per DLS method, giving Ireland a win to remember for ages.

Earlier, despite rain causing a delay in start of the proceedings, Ireland reached 59/1 at the end of powerplay, losing opener Paul Stirling as he slashed a 150 kph ball from Mark Wood to third man.

But Balbirnie and Tucker batted intelligently against England’s powerful bowling line-up, finding the boundaries with ease, giving Ireland a ray of hope for touching the 200-mark. But England’s bowlers fought back from the 12th over, as Adil Rashid got the latter run-out at the non-striker’s end to end a dangerous 82-run stand for the second wicket off 57 balls.

From there, Ireland lost their last nine wickets for just 34 runs in an astonishing collapse to be 157 all out, with four balls unused in their innings. Wood (3/34) and Liam Livingstone (3/17) were the pick of the bowlers for England, while Sam Curran starred with 2/30.

But with Ireland being dominant with both bat and ball in the first half of their innings, England were consigned to their ninth T20I defeat in 12 matches this year and had to see their opponents celebrate a stunning victory with their family and friends in the stands of MCG.