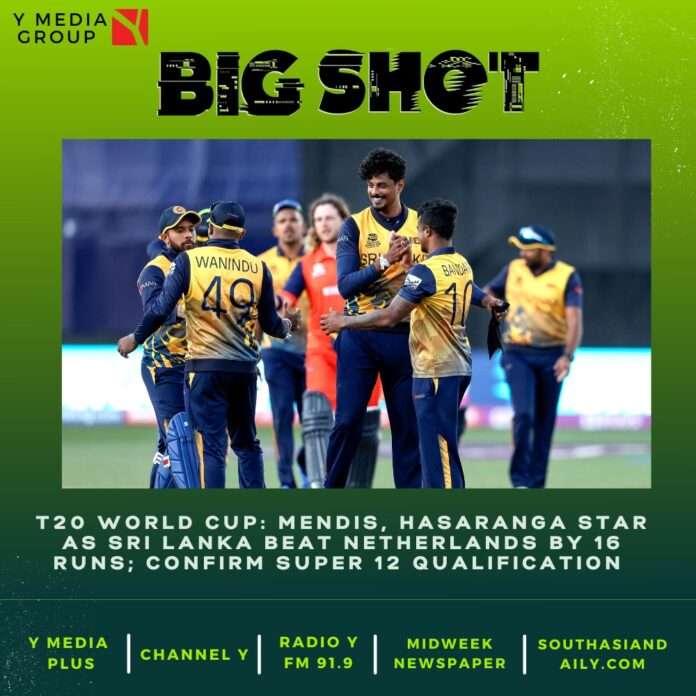 Kusal Mendis slammed a fine 79 while Wanindu Hasaranga picked three wickets as Sri Lanka beat the Netherlands by 16 runs in a decisive Group A match of the first round at Kardinia Park, Geelong, to confirm Super 12 qualification in ICC Men’s T20 World Cup.

After Mendis’s knock helped the 2014 T20 World Cup champions post 162/6 in their 20 overs, the Netherlands opener Max O’Dowd made an unbeaten 71 off 53 balls, laced with six fours and three sixes and was the long ranger for his side.

But he didn’t have much support from the other end as the Netherlands’ ultimately ended up at 146/9 in 20 overs, with leg-spinner Hasaranga taking 3-28 and off-spinner Maheesh Theekshana picking 2-32.

The Netherlands’ hopes of reaching Super 12 are now on the Namibia-UAE clash happening later in the day, with a UAE victory giving them the ticket to continue their journey in the tournament.

Chasing 163, Vikramjit Singh never got going before slog-sweeping a Maheesh Theekshana delivery straight to midwicket. Lahiru Kumara, brought in the eleven due to the fast bowling department being hit with injuries, was successful in enticing Bas de Leede to poke at a length ball outside the off-stump and edged behind to the keeper.

Three balls later, Colin Ackermann chipped tamely back to Hasaranga, departing for his second duck in three matches. Tom Cooper got a brace of boundaries before becoming Theekshana’s second wicket, missing a slog-sweep and seeing his stumps rattled by the mystery spinner.

Captain Scott Edwards fought back with three boundaries, using the sweep to good effect. But his promising stay ended when he went too far across his stumps and was bowled around his legs by Binura Fernando in the 15th over.

The Netherlands then collapsed like a pack of cards – Tim Pringle and Paul van Meekeren were run out, while Hasaranga’s googly castled Tim van der Gugten and Fred Klaassen.

O’Dowd, who didn’t get much strike due to his teammates falling in quick succession, hit a hat-trick of boundaries through the leg side to get his half-century. He went on to take two sixes off Theekshana and sliced a four over off-side off Kumara but saw his knock go in vain.

Earlier, Mendis nearly carried his bat throughout the innings, overcoming various points of struggle in his 44-ball stay at the crease, laced with five fours and as many sixes at a strike rate of 179.55 to get Sri Lanka a score they were very sure of defending.

Electing to bat irst, Sri Lanka didn’t have a great start on a slow pitch as the Netherlands were in control for the first ten overs, conceding only 60 runs. Van Meekeren was impressive with his raw pace and control, resulting in rattling Pathum Nissanka’s stumps with a fiery yorker and trapping Dhananjaya de Silva lbw for a golden duck in the seventh over.

Mendis and Charith Asalanka (31 off 30 balls) ‘nsured Sri Lanka didn’t have a middle-order collapse with their 60-run stand off 45 balls for the third wicket. After Asalanka fell, Mendis went for the big hits to reach his ninth T20I fifty and was supported well by Bhanuka Rajapaksa’s 13-ball 19 as Sri Lanka crossed the 160-mark.

For the Netherlands, van Meekeren and de Leede took two wickets each while van der Gugten and Klaassen took a wicket apiece. But their bowling couldn’t maintain the grip they had in the first ten overs as Sri Lanka collected 102 runs off their last ten overs, which eventually proved to be decisive.