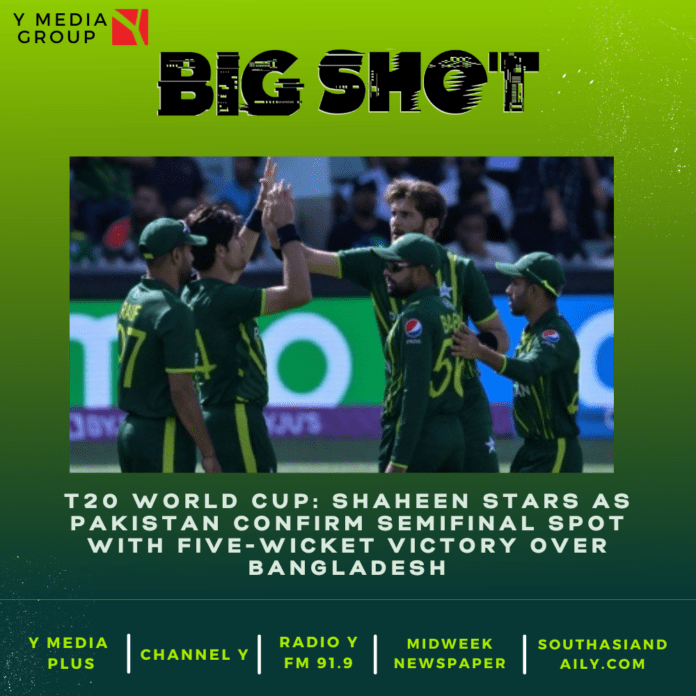 Left-arm pacer Shaheen Shah Afridi’s four-wicket haul helped Pakistan confirm their semifinal spot in the Men’s T20 World Cup with a five-wicket victory over Bangladesh in their final Group 2 match of Super 12s at the Adelaide Oval on Sunday.

The unpredictable nature of the tournament meant that this clash became a virtual knockout game as Netherlands shocked South Africa by 13 runs at the same venue earlier in the day.

With the winner to go into the semifinals, Pakistan made the most of the unexpected lifeline as luck smiled on them to enter the last-four for the second time in as many editions of the tournament.

Afridi took four wickets while conceding 22 runs in his four overs to restrict Bangladesh to 127/8, after being 70/1 at one point. In reply, Pakistan chased down the total with 11 balls remaining despite some wobbles along the way to complete an entry into the semifinals after losing their first two matches in the tournament.

Pushed into bowling first, Pakistan looked a little jittery inside the powerplay despite Shaheen taking out Litton Das. There were some dropped catches and leg-spinner Shadab Khan struggled to find his rhythm against the left-handed pair of Najmul Hossain Shanto and Soumya Sarkar.

Things changed drastically in the 11th over when Sarkar’s reverse sweep went straight to point off Shadab. One immediately brought two as Bangladesh captain Shakib Al Hasan was trapped lbw in controversial circumstances.

After being lbw by on-field umpire Adrian Holdstock when he missed the line of a leg-break from Shadab, Shakib immediately took the DRS. But the DRS didn’t help him in reversing the decision as it didn’t spot the inside edge that he was sure to get.

Shakib was left heartbroken when the TV umpire did not change the on-field decision and had to go reluctantly off the field. From there, Shanto got his fifty and was out for 54 off 48 balls.

But there was no coming back for Bangladesh from that Shakib dismissal as their lack of clarity in batting through middle-overs hurt them yet again. Shaheen came back to pick out Mosaddek Hossain, Nurul Hasan and Taskin Ahmed in quick succession to get his career-best figures in T20I cricket, restricting Bangladesh to an under-par total.

In the chase, Mohammad Rizwan was dropped for nought by Hasan on the third ball. He made Bangladesh pay by sharing an opening stand of 56 in 10.3 overs with captain Babar Azam, who was out of touch in his knock of 25.

But Bangladesh came back to remove Azam and Rizwan (32 off 32 balls) in quick succession, followed by Litton Das’ direct hit catching Mohammad Nawaz short of his crease in a spectacular run-out.

But with 52 needed from 42 balls, Mohammad Haris hit an 18-ball 31, hitting two sixes and a four while Shan Masood slammed two fours in three balls off Shakib to ease the pressure. Though Haris and Iftikhar Ahmed fell quickly, Masood and Shadab ensured the chase was completed for Pakistan to enter the semifinals.