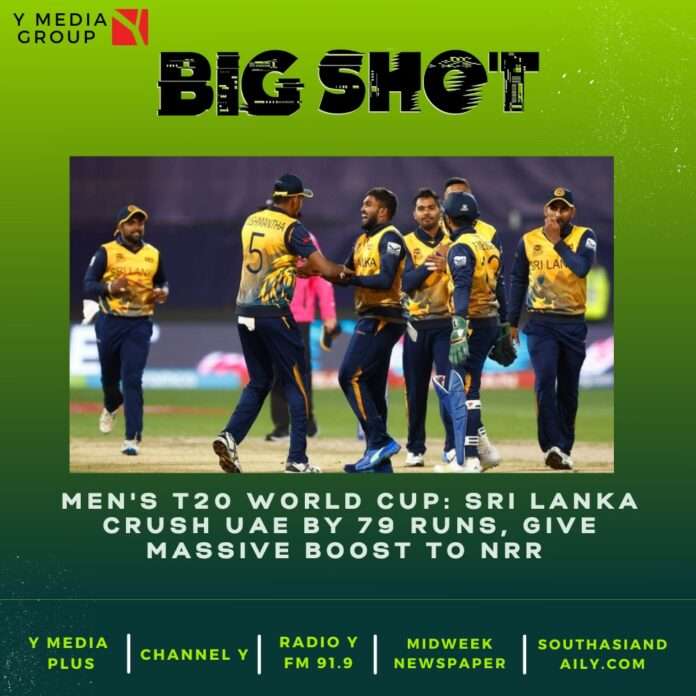 Sri Lanka put on an exhibition of fast bowling under lights to crush United Arab Emirates by 79 runs in a Group A match of ICC Men’s T20 World Cup 2022 and give themselves a massive NRR boost at the Simonds Stadium, here on Tuesday.

After their defeat against Namibia, Sri Lanka bounced back in style and the margin of victory takes their NRR (+0.60) past Netherlands'(+0.15).

Put into bat first, the opening partnership worth 42 runs between Pathum Nissanka and Kusal Mendis got the Asia Cup champions Sri Lanka off to a great start. Despite the wicket of Mendis in the fifth over, Shanaka’s men were the happier side at the end of the Powerplay with over 50 runs.

This was followed by a 50-run stand between Dhananjaya de Silva and Nissanka. The all-rounder was the aggressor between the two, smashing a 21-ball 33 consisting of three fours and a six before a run-out brought his innings to a premature end.

Sri Lanka were cruising towards a big total but leg-spinner Karthik Meiyappan turned the tables completely with his hat-trick Meiyappan came into the bowl the 15th over, with Pathum Nissanka and Bhanuka Rajapaksa at the crease.

The over triggered a middle-order collapse, putting the pressure back on Sri Lanka. Bhanuka Rajapaksa’s attempt to go inside-out saw him hole out in the deep to Kashif Daud. Charith Asalanka departed for a golden duck as he nicked the ball to Vriitya Aravind.

Facing the hat-trick ball, Dasun Shanaka had no answer to the wonderful googly that found the gap between bat and pad and rattled his stumps as Meiyappan wheeled off in celebration.

Meiyappan became the first player to claim a hat-trick for UAE in T20Is. It was also the first hat-trick of the tournament. However, Nissanka, who got to his fifty in the same over as the hat-trick, got a move on and helped Sri Lanka post a competitive total of 152-8 in 20 overs. A blinder from Basil Hameed brought an end to his innings where he scored almost half of Sri Lanka’s team total.

Chasing a par total, three of UAE’s first four victims were cleaned up as Dushmantha Chameera and Pramod Madushan put on an exhibition of fast bowling, swinging and seaming the new ball around.

Under the lights, UAE struggled to get going, losing four wickets inside the powerplay to be reduced to 21/4. Wanindu Hasaranga came on to pile on UAEs woes and the scorecard soon read 42/7 in 12 overs with Sri Lanka eyeing a huge win.

Maheesh Theekshana had the first-innings hero Meiyappan stumped and Hasaranga picked up a third in the 15th by cleaning up Afzal Khan to finish with exceptional figures of 3 for 8 and push UAE to 56 for 9.

UAE’s No 10 batter Junaid Siddique (18) came out all guns blazing, and extended his stay till the 18th over. Shanaka brought back Chameera to end the innings, only for Siddique to smash a short ball out of the ground for the biggest six of the tournament.

Siddique attempted to go after Theekshana too and perished in the 18th over as UAE were eventually bowled out for 73 as Sri Lanka romped home to a 79-run win.

Share
Facebook
Twitter
Pinterest
WhatsApp
Previous article
Pakistan Might Pull Out Of ODI World Cup As India Refuses To Visit Pakistan For Asia Cup 2023: Reports
Next article
BOLO Program announces new reward of up to $250,000 in update of Canada’s ‘Top 25’ Most Wanted Fugitives, Seven suspects wanted by Toronto Police, Two in the Top 5