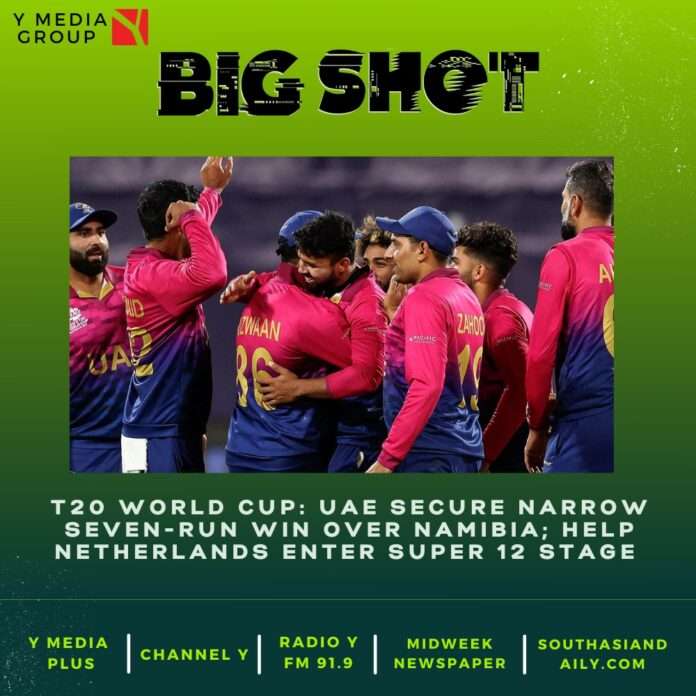 UAE survived a late scare from all-rounder David Wiese’s 55 to secure a narrow seven-run win over Namibia in their last Group A match in first round of the ICC Men’s T20 World Cup at Kardinia Park on Thursday.

Thursday’s thrilling win is also UAE’s first-ever win in their history of participating in T20 World Cups. After Muhammad Waseem slammed a 41-ball fifty while skipper CP Rizwan hit an unbeaten 43 off 29 deliveries to help UAE make a competitive 148/3, Namibia were down and out at 67/7 in 13 overs.

That’s when Wiese stepped up to hit three fours and as many sixes in his 36-ball stay at the crease and shared a 70-run stand with Rubel Trumpelmann with the eighth wicket, a record partnership in T20 World Cup history, as dew started to settle in.

But Wasim took out Wiese in the final over and gave away just six runs in the final over to knock Namibia out of the competition and propel the Netherlands to enter Super 12 stage from Group A alongside 2014 champions Sri Lanka despite losing to them by 16 runs.

Namibia’s troubles increased when Nicol Loftie-Eaton was trapped lbw while going for a switch hit off Hameed while captain Gerhard Erasmus (castled by Karthik Meiyappan) and JJ Smit (run out at bowler’s end) were out in quick succession in the eighth over.

With Zahoor Khan taking out Jan Frylinck and Zane Green in a span of four balls in the 13th over, it felt the match was all over for Namibia. But Wiese stitched a 70-run stand off 44 balls for the eighth wicket with Rubel Trumpelmann, smashing seven boundaries between themselves to give Namibia a real chance of winning the match.

With 14 needed off the final over, Wiese tried to clear long-on off a cross-seam ball from Muhammad Waseem, but the fielder leapt high in the air to take the catch to perfection, leaving the all-rounder devastated as UAE signed off from T20 World Cup on a high.

Earlier, electing to bat first, the opening pair of Waseem and wicketkeeper Vriitya Aravind put on just 39 runs in first eight overs. Aravind struggled to accelerate after the power-play ended and got dismissed for 21 off 32 balls off left-arm spinner Bernard Scholtz.

As soon as Rizwan joined Waseem at the crease, the acceleration for UAE arrived. Waseem brought out the boundaries against Jan Frylinck and JJ Smit while Rizwan took fours off Frylinck and Ben Shikongo.

Two balls after reaching his fifty in the 15th over, Waseem gave a simple catch to short third man off Shikongo. But Rizwan carried on and remained unbeaten on 43, hitting three fours and a six.

He was well-supported by Basil Hameed, who provided the late impetus to the innings with an unbeaten 25 off just 14 deliveries. The duo added 33 runs in the last two overs, including smacking three sixes in the last seven balls, as UAE reached a total which gave them something to defend, which was eventually just enough in the end for a win.