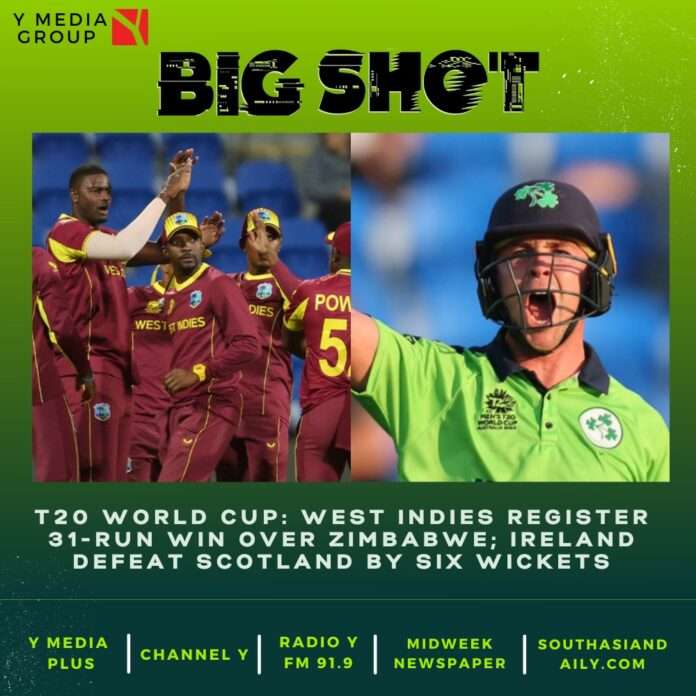 Fast bowling duo of Alzarri Joseph and Jason Holder shared seven wickets between themselves as two-time champions West Indies defeated Zimbabwe by 31 runs in a must-win Group B match in the first round of ICC Men’s T20 World Cup at Bellerive Oval on Wednesday to stay alive in the pursuit of making the Super 12 stage.

After making 153/7 in their 20 overs, with Sikandar Raza’s brilliant 3/19 causing a middle-order meltdown, West Indies didn’t have a good start to their defence as Zimbabwe’s stand-in captain Regis Chakabva hit three fours in an 18-run opening over off Kyle Mayers. Joseph, who took career-best figures of 4/14 in his four overs, struck in his second over after conceding 11 runs in the opening over as Chakabva chopped on to his stumps.

Wesley Madhevere hit two fours and a six in his 19-ball 27, but was losing partners from other end as Joseph shattered Tony Munyonga’s stumps with a pacy yorker while Obed McCoy had Sean Williams chasing a drive and nicking behind to keeper. Holder, who took 3/12, got Madhevere out when he sliced to backward point timing his catch to perfection.

The turning point of the match came when an in-form Raza mistimed his slap over the off-side to mid-off moving to his left off Odean Smith in the eighth over. From there, despite some resistance from Ryan Burl (17) and Luke Jongwe (29), who hit 17 runs in the 17th over off Smith, Zimbabwe crashed to 122 all out in 18.2 overs, giving the West Indies a much-needed victory in the tournament, as seen from the jubilant celebrations after the win was confirmed in their favour.

Earlier, electing to bat first, West Indies started well despite losing Mayers in the fourth over, who top-edged a pull to keeper off Blessing Muzarabani. Johnson Charles (45) and Evin Lewis (15) shared a vital 49-run stand off 38 balls to get the West Indies innings back on track.

But Zimbabwe’s introduction of Raza from the seventh over triggered a West Indies meltdown in the middle-order. The off-spin all-rounder had his first scalp in the tenth over when Lewis holed out to long-on. Captain Nicholas Pooran was next to depart, falling to Williams, chipping back a simple catch to the bowler.

West Indies were then dealt with a severe blow when Charles departed for 45 after a mix-up with Rovman Powell, resulting in a run-out. Raza added more misery when he trapped Shamrah Brooks lbw and took a superb catch off a Jason Holder chip on his own bowling to end with 3/19 in his four overs.

Struggling at 101/6, a late flourish from Powell (28 off 21 balls, including two sixes in the final over) and Akeal Hosein (23 not out off 18 balls) allowed the West Indies to cross the 150-mark, after losing their way in the middle post a strong start.

With all four teams in Group B of the first round having two points each, the net run rate will become a factor in deciding the top two finishers, especially with rain threat looming on last two matches to be held on Friday. Currently, Scotland and Zimbabwe are in the top two with West Indies and Ireland at third and fourth place respectively.

Curtis Campher and George Dockrell shared an unbeaten 119-run stand for the fifth wicket in Ireland’s successful chase of 177 to seal a come-from-behind six-wicket win over Scotland in their Group B match of the first round in ICC Men’s T20 World Cup at Bellerive Oval on Wednesday.

After opener Michael Jones hit a magnificent 86 off 55 balls to carry Scotland to a massive 176/5, the bowlers came into act by reducing Ireland to 61/4 in 9.3 overs and victory looked improbable with every minute.

That’s when Campher (72 not out off 37 balls) and Dockrell (39 not out off 27 balls) joined forces to shock Scotland and get a win out of nowhere for Ireland with a brilliant partnership in just 9.3 overs and keep them in the reckoning for a Super 12 spot.

The duo ran excellently hard between the wickets, converted their ones into twos, twos into threes and kept the boundaries coming consistently from the 11th over onwards and yielded runs in double figures till Campher finished off the chase with a hat-trick of fours, last of which was a crisp square drive past point and roared in delight over getting a thrilling win for Ireland.

In the chase, Paul Stirling and captain Andy Balbirnie impressed with boundaries in the first three overs. But the duo could not build on, falling to fast bowlers Safyaan Sharif and Brad Wheal in power-play.

Spinners Mark Watt and Chris Greaves then took over, removing Lorcan Tucker (20) and Harry Tector (14) just as they were on the verge of converting their promising knocks into something substantial.

When the drinks break was taken, Ireland had new batters in Campher and Dockrell with 116 runs still needed in 63 deliveries. After Dockrell took a boundary each off Wheal and Greaves, Campher joined the party by slog-sweeping Watt for six in an 18-run 13th over which also had four wides.

Campher frequently targeted the short square dimensions of the stadium, as seven of his nine boundaries came from square of the wicket regions on both sides, with Dockrell supporting him well.

Campher also used the crease well, heaving, scooping, cutting and slicing for boundaries for his first T20I fifty coming at a strike-rate of 225 and led Ireland to their highest ever successful run-chase in T20 World Cups with an over to spare.

Earlier, Scotland had a dominant innings with the bat, hardly keeping any foot wrong right from the time of winning the toss and electing to bat first. Jones was unarguably the star of Scotland’s innings, hitting six fours and four sixes in his 55-ball 86, at a high strike-rate of 156.36.

After losing his opening partner George Munsey in the second over of the innings, Jones had to be cautious as well as adjust to the conditions. After passing through the initial phase, he then came out swinging with his array of shots, and looking delightful in hitting a majority of his boundaries through the leg-side, including one six landing on the roof of the stadium.

Jones was involved in two useful stands for Scotland — 59 runs for the second wicket with Matthew Cross (28) and 77 runs for the third wicket with captain Richie Berrington (37). Though Jones fell in the 19th over of the innings, Scotland still managed to get 54 runs off the last five overs to finish with a strong total.

Ireland, on the other hand, were a bit sloppy in the field with Gareth Delany dropping Jones at deep backward square leg in the 15th over. Moreover, Curtis Campher, who was Ireland’s best bowler by a mile, got only two overs to bowl, while Delany (0/28 in three overs) and Barry McCarthy (0/59 in four overs) leaked 87 runs from their combined seven overs, which didn’t cause much issue in their quest for a crucial win.