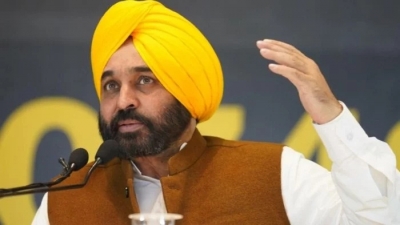 The Shiromani Akali Dal (SAD) on Friday demanded that Punjab Chief Minister Bhagwant Mann should register a written protest with Union Home Minister Amit Shah, who is visiting Chandigarh on July 30, on his statement to hand over land to Haryana for a separate Assembly in Chandigarh.

In a statement released here, SAD spokesman Daljit Singh Cheema said it is an opportunity for the Punjab Chief Minister to register a written protest with Shah, demanding withdrawal of his statement on allotment of land to Haryana for construction of separate state Assembly.

He said similarly Mann should also withdraw his own statement, which he had given on instructions of AAP convener and Delhi Chief Minister Arvind Kejriwal demanding land for Punjab also.

He said Chandigarh belongs to Punjab and one cannot demand a plot in a land which belongs to himself.

The SAD leader also said the Akali Dal has already registered a written protest in the form of memorandum submitted to the Governor of Punjab by a delegation led by SAD President Sukhbir Singh Badal.

He said the party is committed for this cause and will not allow the Union government to hand over this land to Haryana but the AAP government of Punjab should not keep on betraying the people of the state.

Cheema said it was now the responsibility of Punjab Chief Minister to do the same and hand over written protest to the Union Home Minister. He said the Home Minister should be made aware of the stand of Punjabis on Chandigarh.

Apart from the issue of Chandigarh, the Punjab Chief Minister should also raise the issue of converting Panjab University into a Central university and he should clearly tell Shah that Punjab will not let this happen, he added.