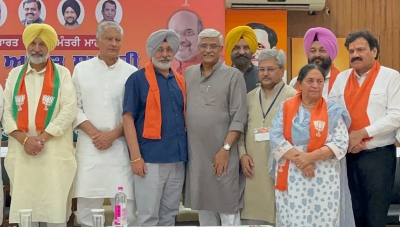 In a setback to the Opposition Congress in Punjab, four former ministers and an ex MLA switched loyalties and joined the BJP in the presence of Union Home Minister Amit Shah.

While Verka was the Dalit face of the Congress, Arora was the working president of the Punjab Pradesh Congress Committee. Sidhu and Kangar are Jat-Sikh leaders.

Except for Dhillon, all the Congress leaders who joined the BJP had lost the February 20 elections.

He shared a video of the rebel Congress sitting with him in Panchkula before their joining to the BJP.

He said the BJP had taken “trash” into its fold and would realise in the next elections what gift Shah was taking with him.