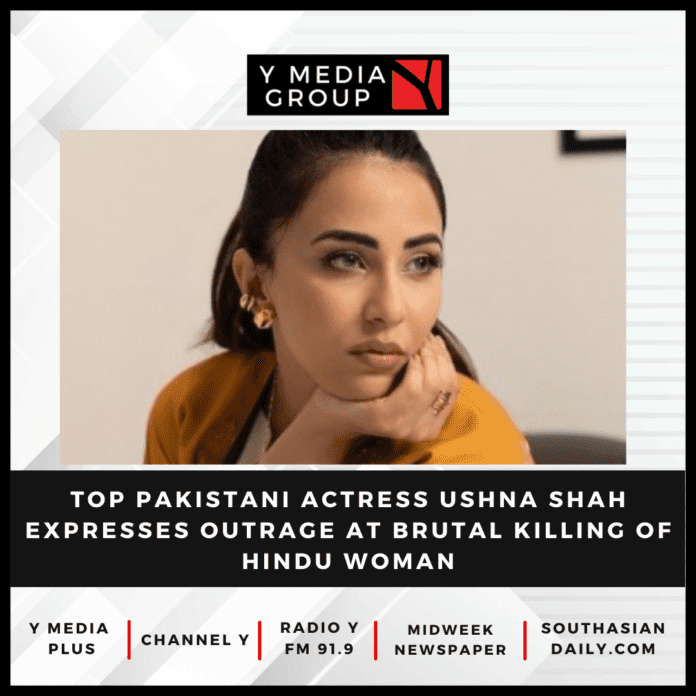 In the light of reports of Daya Bheels tragic murder, Pakistani actress Ushna Shah has criticised the treatment of religious minorities in the country, according to media reports.

The ‘Bashar Momin’ actor took to her Twitter to express her displeasure with how Pakistani religious minorities are treated in the nation, Samaa TV reported.

She wrote, “Daya Bheel, a Sindhi Hindu, raped, murdered and decapitated in the most heinous manner yet barely any media outrage. Why aren’t we speaking about this.”

Daya Bheel, a 44-year-old widow, was allegedly murdered on Tuesday, and her mutilated body was discovered in a field half a kilometre from her home in the Deputy Sahab village, 18 km from the Sindh’s Sanghar district office, Samaa TV reported.

In a follow-up tweet, she said that a large number of minorities in Pakistan has no voice, just like late Daya Bheel.

The ‘Habs’ star wrote, “I have some close Hindu-Pakistani friends. Wonderful, kind people, some are even like family to me. They happen to be from privileged homes. I shudder to think that their lives would have been bad if they had not been, like the majority of minorities, who have no voice #dayabhel.”

Earlier this year during the holy month of Ramadan, she had shared an instance where she was helped by a Christian and a Hindu as she went on to offer her Asr prayers in Ramadan, The Current reported.

“A Christian and a Hindu helped me pray Asr just now and set an example of tolerance,” Shah had tweeted.

“At Nabila salon, the makeup artist for today (who is Hindu) held up the faucet so I could perform Wudu easily and another makeup artist (who did my makeup last night), who is Christian, spread out the Janemaz for me.”

Last year, Ushan had expressed solidarity with the minorities in the country on the 75th Independence Day.

Taking to Instagram, the actress had said, “I’ll celebrate Independence Day when the minorities in Pakistan are given the economic, physical and religious securities as well as the civic liberties promised to them. The very promise which laid the foundation of this country,” The Current reported.