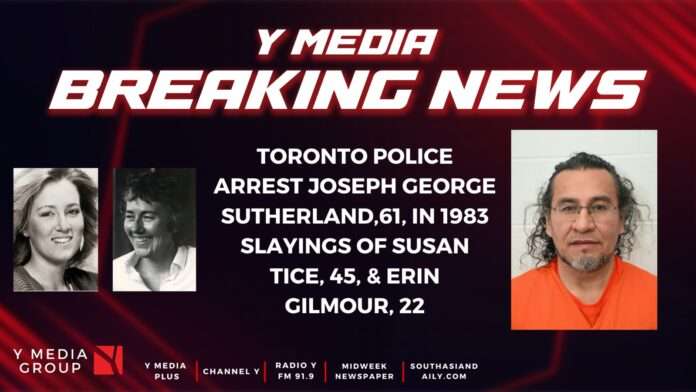 On Wednesday, August 17, 1983, a relative of Susan Tice, 45, went to her home on Grace Street to check on her, where he discovered her body in an upstairs bedroom. She had been sexually assaulted and stabbed numerous times.

Four months later, on December 20, 1983, a friend went to the home of Erin Gilmour, 22, on Hazelton Avenue and located Erin’s body in a bedroom. She had also been sexually assaulted and stabbed numerous times.

The women were not known to one another.

The Toronto Police Homicide and Missing Persons Unit, Cold Case section, has been actively investigating the sexual assaults and murders of these two women since 1983.  In 2000, DNA obtained at the crime scenes linked the cases and investigators determined the same man was responsible for both homicides.

Toronto Police made an appeal to the media and the public in November 2008, announcing a reward for information about the homicides,  and in March 2016, investigators sent out a YouTube video appealing for any information leading to the identification of a suspect.

In 2019, investigators began a Genetic Genealogy investigation into these two cases with the assistance of OTHRAM Inc. Through the use of this technique as an investigative tool, the homicide team was able to identify a suspect in these murders, residing in Moosonee, Ontario.

On Friday November 25, 2022, Joseph George Sutherland, 61, of Moosonee, was arrested with the assistance of the O.P.P.

He is charged with:

“As pleased as we are to announce this arrest, it will never bring Erin or Susan back, and on behalf of the Toronto Police Service, I want to again express my condolences to their families,” said Chief James Ramer. “After 39 years of dogged police work, our investigators have made sure this individual will answer for these heinous crimes. The Toronto Police Service will never give up on finding people who commit crimes in our city and who show a flagrant disregard for people’s lives.”

Toronto Police would like members of our Homicide & Missing Persons Unit, and in particular, our Cold Case team and Forensic Identification team, past and present, for their commitment to bringing this person to justice. TPS would also like to acknowledge our colleagues at the O.P.P for assisting with the investigation.