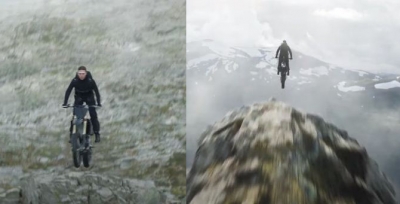 Close on the heels of the rapturous reception to ‘Top Gun: Maverick’ at the Cannes Film Festival, another Tom Cruise action franchise is back, with the first trailer of ‘Mission: Impossible – Dead Reckoning: Part One’ being dropped on Monday evening by Paramount Pictures.

‘Dead Reckoning’, reports ‘Variety’, is the seventh entry in the spy thriller series, which stars Cruise as Ethan Hunt, a special agent of the Impossible Missions Force (IMF).

“Your days of fighting for the so-called ‘Greater Good’ are over,” Czerny says to Cruise in the trailer, according to ‘Variety’. “This is our chance to control the truth. The concepts of right and wrong, for everyone for centuries to come. You’re fighting to save an ideal that doesn’t exist. It never did. You need to pick a side.”

Several action set pieces are teased in the trailer, including a sniper battle during a desert storm, a fistfight in a nightclub and a chase atop a moving train. The trailer closes with a dramatic shot of Cruise, famous for doing his own stunts in the franchise, driving a motorcycle off a cliff and skydiving into the air below.

‘Dead Reckoning’ is written and directed by Christopher McQuarrie, who previously helmed ‘Rogue Nation’ in 2015 and ‘Fallout’ in 2018. ‘Part One’, co-produced by Cruise, and scheduled for a July 14, 2023, release, will be followed by ‘Dead Reckoning: Part Two’ in 2024, which is expected to be the final appearance of Cruise as Ethan Hunt.