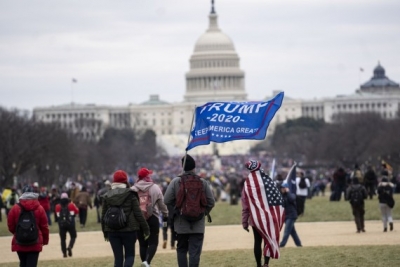 Former US President Donald Trump has been accused of an “attempted coup” for orchestrating the January 6, 2021, Capitol Hill riot, a House select committee investigating the insurrection heard during its first public hearing.

Edwards testified that she was called a “traitor” and a “dog” by the rioters before she was knocked unconscious.

It was one of a series of hearings set to be televised throughout the month to show the public what investigators have uncovered about the Capitol riot.

Democrat Bennie Thompson, the select committee’s chairman, told the hearing: “January 6 was the culmination of an attempted coup, a brazen attempt, as one writer put it shortly after Jan 6, to overthrow the government.

“The violence was no accident. It was Trump’s last stand.”

In her remarks, Liz Cheney, the Republican vice-chair of the committee, said that Trump had “lit the flame of this attack”, the BBC reported.

“Those who invaded our Capitol and battled law enforcement for hours were motivated by what President Trump had told them: that the election was stolen and that he was the rightful President.

“President Trump summoned the mob, assembled the mob and lit the flame of this attack,” she was quoted as saying.

Footage of a testimony by former US Attorney General Bill Barr was also aired, in which he said Trump’s claims that the 2020 presidential election was stolen were “baseless”.

“We can’t live in a world where the incumbent administration stays in power based on its view, unsupported by specific evidence, that there was fraud in the election,” the BBC quoted Barr was saying.

Meanwhile, Trump’s allies and supporters have charged the inquiry as a political “witch hunt” designed to tar the former President and the Republican Party.

Earlier, Trump had dismissed it as a “political hoax”.

On January 6, 2021, thousands of individuals, mostly Trump supporters, stormed the Capitol in Washington, D.C. and disrupted a joint session of Congress in the process of affirming the 2020 presidential election results.

Approximately 140 police officers were assaulted in the Capitol attack — 80 US Capitol Police and 60 from the Metropolitan Police Department.

Authorities have linked five deaths to the mayhem. Four officers who responded to the attack reportedly committed suicide within the next several months.

The worst attack on Congress in more than 200 years, the siege led to Trump’s second impeachment by the House shortly, with barely a week left in his presidency.

They accused him of inciting insurrection, but he was acquitted in the Senate.