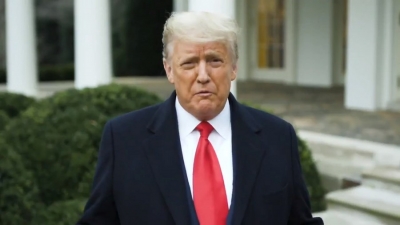 Former US President Donald Trump’s attorneys have filed a lawsuit in court calling for the appointment of an independent party to review the documents retrieved from his Mar-a-Lago estate by FBI agents earlier this month.

In a statement on Monday, Trump’s attorneys said the documents are “presumptively privileged” material because they were generated while he was President, reports dpa news agency.

According to the former President’s team, only a “special master” — an independent person appointed by a court to review materials — could determine whether the material is privileged.

They are also asking a federal court to halt the government’s review of the documents that were removed from Mar-a-Lago until a special master is appointed, calling the FBI’s search of Trump’s property a “shockingly aggressive move” against “the clear front-runner in the 2024 Republican Presidential Primary, should he decide to run”.

The FBI conducted a surprise raid of the former President’s Palm Beach estate on August 8 as part of an investigation into Trump’s handling of classified material, including some of the most sensitive files held by the government.

In the fallout, the Justice Department released the warrant that led to the search, which revealed that the department has an ongoing criminal investigation into potential violations of the Espionage Act, illegal destruction of government documents and obstruction of justice.

The search warrant and a receipt of the items that were removed from Trump’s property show that FBI agents collected 11 sets of classified materials, including one set that included some of the government’s most sensitive secrets.

The Presidential Records Act established that documents produced by an administration remain the property of the US, not the President, or any other official, after they leave office, regardless of whether the material is classified or not.

Trump’s attorneys, however, argue that he was cooperating with the Department of Justice, and the search was unnecessary.

The motion confirms reporting that Trump’s attorneys met the FBI at Mar-a-Lago and turned over surveillance footage of a locker where documents were being kept after the Justice Department served the former leader with a subpoena in May.

The FBI has “filter teams” that oversee searches like the one that took place at Mar-a-Lago.

The job of those teams is to make sure that agents are adhering to the parameters of a search warrant, and later, to filter through all of the material that was obtained in a search to ensure that investigators only see information relevant to their investigation.

Trump’s attorneys, in their filing on Monday, claim that they are unable to see the plans of the filter team without access to the underlying affidavit filed in pursuit of the search warrant.

But Trump has not asked the court to release the affidavit.

The South Florida magistrate judge overseeing the case is now considering releasing a redacted version of the affidavit that provided probable cause that crimes were committed, leading to the search.

The Justice Department must file proposed redactions to the affidavit by Thursday.