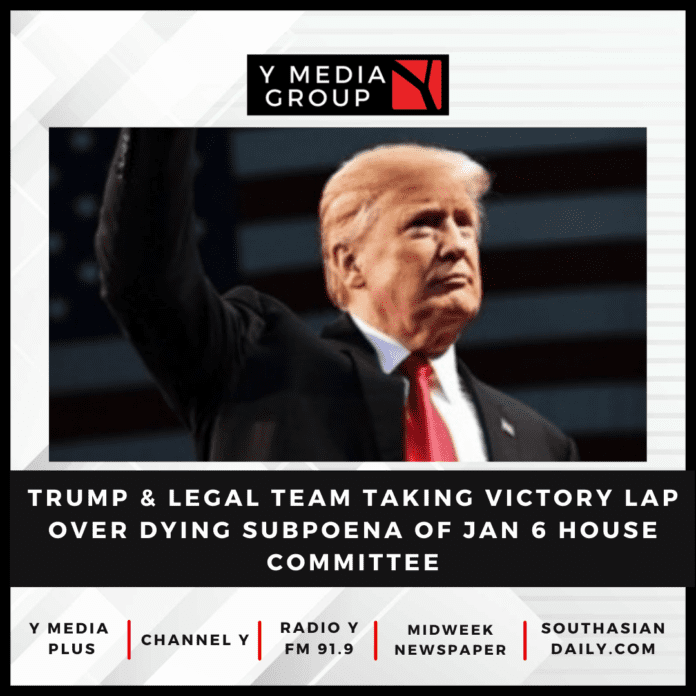 US former President Donald Trump, under a litany of legal troubles, loves victory, even when it’s not there, but this time he is taking a victory lap with his legal team over a dying subpoena issued to him by the January 6 Congressional Panel on the 2021 Capitol Hills riots case.

The subpoena issued to him by the Committee to appear before it and answer to the charges and testimonies on the riots, allegedly incited by him, as testified by multiple witnesses, which he refused to respect and appear, is finally dying as the November 8 mid-terms has allowed the Republicans to retake the House of Representatives with wafer thin majority of 222 to the Democrats’ 213.

The new house sits for its first session on January 3, 2023.

He loves declaring victory so much so, even when he didn’t actually win (like his relentless and baseless claims that he won the 2020 election) or when the so-called victory was a relatively pointless one, media reports described his victory lap over the dying subpoena.

The case in point is the withdrawal of a subpoena by the House Select Committee investigating the January 6, 2021 attack on the Capitol.

With Republicans poised to retake control of the House as the new Congress is sworn in on January 3, 2023, any outstanding subpoenas issued by the committee are set to expire.

Trump reacted in his own style to the subpoena withdrawal, as it was dying with the new House of Representatives, by alluding to the memorable portrayal of the Wizard from the 1939 iconic film ‘The Wizard of Oz’.

“I am the Great and Powerful Trump! Pay no attention to that Special Counsel behind the curtain!” Trump said. Not that’s not what exactly he said but literally amounted to it, media reports said.

This is what Trump wrote on his Truth Social account that has thousands of followers.

“Was just advised that the ‘Unselect Committee of Political Thugs’ (he always refers to select committee with utter disdain and disrespect) has withdrawn the Subpoena of me concerning the January 6th Protest of the CROOKED 2020 Presidential Election. They probably did so because they knew I did nothing wrong, or they were about to lose in Court. Perhaps the FBI’s involvement in RIGGING the Election played into their decision. In any event, the Subpoena is DEAD!” Trump said in his sardonic manner.

Trump’s attorney of Indian origin, Harmeet Dhillon tweeted the victory lap, the social media platform where Trump’s account has now been reinstated, ever since billionaire Elon Musk bought the platform for $44 billion.

Trump is however yet to tweet again because it could cost him millions. Because you have now to pay $8 per tweet and there are no freebees as before under Musk.

Like her Boss, Dhillon claimed the “W”, tweeting that the lawsuit her firm had filed was the reason that the committee had “waved the white flag” and withdrew the subpoena. “We were confident of victory in court,” she wrote, attacking the committee for having “wasted millions for a purely political witch-hunt, total abuse of process & power serving no legitimate legislative purpose.”

Commentators ranging from pollsters, political analysts and media have pointed out, this wasn’t a victory won in court, but as much as it was the committee recognizing the reality of their expiration date.

A technical victory indeed. Dhillon’s tweet is of political significance as she is challenging Ronna McDaniel for RNC Chair (along with My Pillow purveyor/conspiracy monger Mike Lindell), had attached the letter from committee Chairman Rep. Bennie Thompson (D-MS), which spelled out exactly why the subpoena was withdrawn.

“As you may know, the Select Committee has concluded its hearings, released its final report and will very soon reach its end,” wrote Thompson.

“In light of the imminent end of our investigation, the Select Committee can no longer pursue the specific information covered by the subpoena.”

If one considers the challenges Trump’s legal team faces as they tried to steer him through the committee’s investigation, the FBI’s execution of a search warrant at Mar-a-Lago, and other legal problems, compounded an already messy situation.

Trump’s legal team is obviously wanting to wrest whatever enjoyment they can out of even a pyrrhic victory –it might be the last one they can claim for quite a while, with the various investigations progressing, albeit slowly.

Especially those headed by the Fulton County, Georgia District Attorney and the Special Counsel appointed by the DOJ of interference in the election process by Trump’s poll agents in that state and county.

The new counsel Smith had issued subpoenas to four states which are required to answer.

Smith, appointed by the Attorney General Merrick Garland, issued the subpoenas, which are not dead as they are from the DOJ, a continuing body.