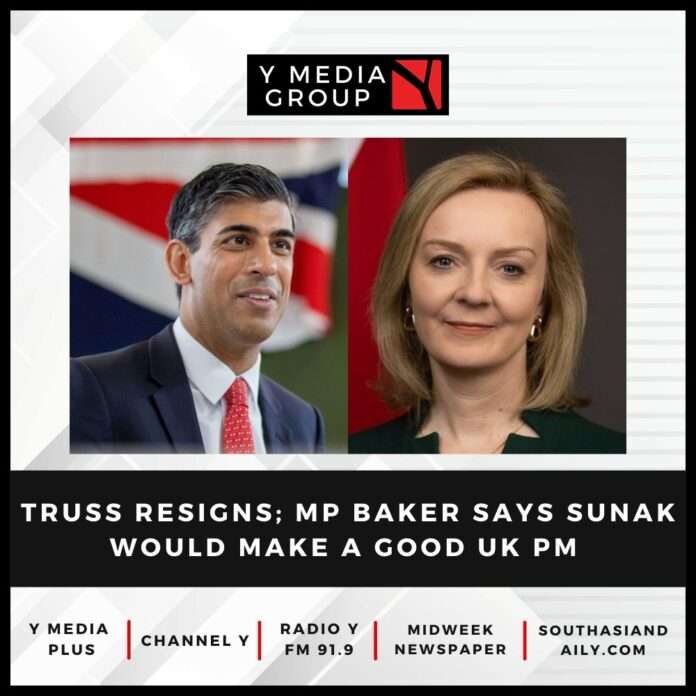 “I feel the country needs a change of direction… Rishi would be a good Prime Minister… We have a number of people in the party who could be good Prime ministers,” Baker told ITV’s Peston.

With just 45 days in office, Truss resigned on Thursday, saying she would remain as Prime Minister until a successor had been chosen, which she said would happen within a week.

Speaking outside 10 Downing Street office, Truss accepted that she could not deliver the promises she made when she was running for Conservative leader, having lost the faith of her party.

Barely two months after losing to Liz Truss in the race for UK Prime Minister, Sunak has once again been emerging as the favourite to replace her with 100 Tory MPs considering a no-confidence motion against her.

According to a Bloomberg report, Conservative MPs are utterly divided over who should take over.

“Rebellious Conservative MPs are destroying the capacity for the party to govern,” Baker told ITV Peston and instead, asked the MPs to do it privately.

Sunak’s warnings about Truss’s economic plans have been largely borne out, which gives him credibility with markets.

“Yet he has large numbers of enemies in the Tory party. There are about 100 MPs on the ideological right of the party — including ardent Brexiteers and supporters of Johnson — who are determined to prevent a Sunak premiership,” the Bloomberg reported.

An MP had said earlier that they are backing “ABSOM” — Anyone But Sunak Or Mordaunt.

Chancellor of the Exchequer Jeremy Hunt is also seen as a PM contender. But he told Sky News he had ruled out ever becoming prime minister for family reasons.