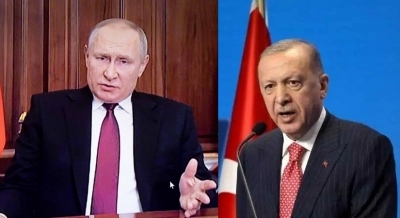 During the phone talks on Monday, Erdogan told Putin that the “attacks” by Kurdish People’s Protection Units (YPG) against Turkey and Syrian civilians are continuing in Syria despite an earlier agreement between Ankara and Moscow, the statement added.

Referring to a 2019 deal between Russia and Turkey, the Turkish President stressed that Turkey could not establish a 30-km-deep “terror-free zone” into Syria along the Turkish border, which the deal stipulated, Xinhua news agency reported.

“Making these areas safe is a necessity” for Turkey, he said.

Their talk came after Erdogan added that Turkey is preparing for a new military operation in northern Syria to establish a safe zone along its southern border.

“As soon as the Turkish Armed Forces complete its intelligence and security preparations, these operations will begin,” he said last week.

Turkey’s forces and the YPG members often exchange fire in the region. But the clashes between the group and the Turkish military have accelerated since early this year.

The two Presidents also discussed the Ukraine crisis, as well as Turkey-Russia relations, said the statement.

The Turkish President emphasised the need for steps that will “minimise the negative effects of the conflict and build trust by re-establishing the ground of peace between Russia and Ukraine as soon as possible,” said the presidency.

Turkey is ready for meeting with Russia, Ukraine, and the United Nations in Istanbul and to play a role in a possible observation mechanism if both sides agree on principle, Erdogan told the Russian President.