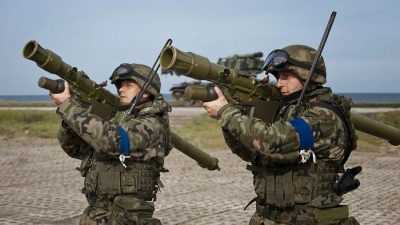 British Defence Secretary Ben Wallace announced that the UK will send its first long-range missiles to Ukraine despite a threat by Russian President Vladimir Putin to the West against the delivery of these weapons to Kiev.

In a statement late Sunday, Wallace said: “As Russia’s tactics change, so must our support to Ukraine. These highly capable multiple-launch rocket systems will enable our Ukrainian friends to better protect themselves against the brutal use of long-range artillery, which Putin’s forces have used indiscriminately to flatten cities.”

He said that the UK is supplying “vital weapons they (Ukrainians) need to defend their country from unprovoked invasion”, the BBC reported.

The UK’s multiple launch rocket system can fire 12 surface-to-surface missiles within a minute and can strike targets within 80 km with pinpoint accuracy.

It is similar to the M142 High Mobility Artillery Rocket System (HIMARS) which the US is sending to Ukraine “following receipt of guarantees they would be used for defensive purposes only and not to strike targets inside Russia”, the BBC report said.

Wallace’s announcement came hours after Putin threatened to expand the list of targets Russia will attack in Ukraine if Western countries send long-range weapons to Kiev.

In an interview to Russia 1 on Sunday, the President said: “In general, all this fuss about additional arms supplies, in my opinion, has only one goal – to drag out the armed conflict as long as possible.

“If they are supplied, we will draw appropriate conclusions from this and use our weapons, of which we have enough, to strike at those targets that we are not striking yet.”

Putin also noted that the shipment of US-made multiple-launch rocket systems is unlikely to bring anything new to Kiev’s forces.

The Ukrainian military already has Soviet- and Russian-designed Grad, Smerch, and Uragan systems of the same kind, he added.

The Russian President’s warning came as explosions shook parts of Kiev on Sunday in the first assault on the capital city for weeks, while fierce fighting for control of key towns and cities in the eastern Donbas region continues, reports the BBC.