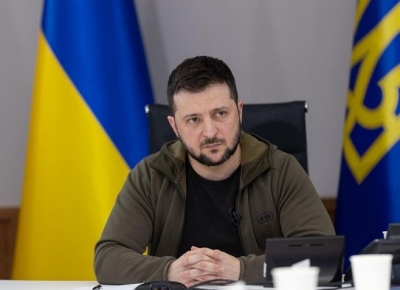 Ukrainian President Volodymyr Zelensky has called on philanthropists to help rebuild his war-torn country by joining a fundraising platform to raise money to support Kiev.

During a presentation to United24, the Kiev-based platform launched on May 5, the President said: “The Russian army is extremely brutal. It is trying not only to kill as many people as possible, but to destroy all life-sustaining infrastructure.

“Bridges and roads, houses and hospitals, schools and businesses. Entire cities have been burnt down,missiles have targeted universities and maternity hospitals. Russian troops leave only ruins in their wake.”

Zelensky reiterated that Ukrainians “already, today” have to have somewhere to return to, which is why he initiated the creation of United24, reports Ukrayinska Pravda.

According to the President, those making donations will be able to decide how their money will be spent, “whether that’s rebuilding the bridge in Irpin, the photograph of which has been shared across the entire world, purchasing medical equipment, or for other purposes”.

He added that the names of all those who donate money to rebuild the devastated country “will be indelibly etched in Ukraine’s history, the history of defending freedom and democracy”.

The funds will address three main issues: defence and demining; medical aid; and the rebuilding efforts.

The funds will go to the accounts held at the National Bank of Ukraine.